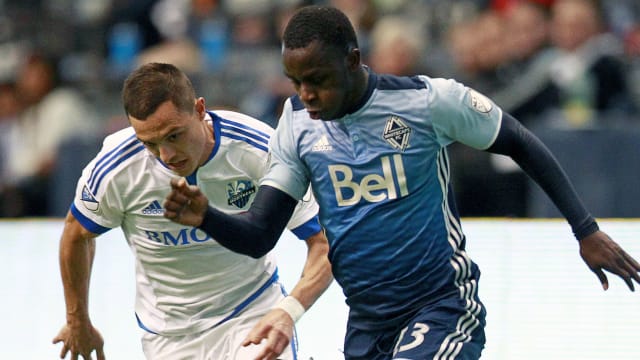 A 10-man Vancouver Whitecaps held on to secure a thrilling 4-3 win over Toronto FC in MLS action on Saturday.

Kekuta Manneh scored a brace and played a part in the eventual match-winner as the Whitecaps kept up the pace in the Western Conference.

Sebastian Giovinco scored a double of his own for Toronto but they could not avoid defeat - their fourth of the season.

Early goals to Manneh and Christian Bolanos had Vancouver cruising at the BMO Field in Toronto before the hosts struck back through Giovinco in the 37th minute with a superbly-taken goal, just minutes after Jozy Altidore had missed a penalty.

Italy international Giovinco tied things up at 2-2 in the 66th minute but Manneh struck again four minutes later before Pedro Morales made it 4-2 with his fifth goal of the season.

However, a red card to Fraser Aird reduced Vancouver to 10 men, before Drew Moor pulled one back for Toronto 10 minutes from time, but it proved too little too late as the Whitecaps held on for the three points.

Vancouver's win - their third straight - saw them move up to second in the West before dropping down to third after FC Dallas' 2-0 win over Seattle Sounders.

Mauro Diaz gave Dallas the lead with a spot-kick in just the third minute at the Toyota Stadium before Michael Barrios wrapped up the result with 10 minutes left to play.

Dallas are now just one point behind Western Conference leaders Colorado Rapids after they were held to a 1-1 draw at Columbus Crew.

Cedrick Mabwati opened the scoring for Columbus in the 23rd minute but they were pegged back by Republic of Ireland international Kevin Doyle early in the second half.

The draw saw Colorado extend their unbeaten streak to seven games ahead of next week's trip to Seattle.

In the Eastern Conference, Montreal Impact kept up their spot atop the standings despite seeing their winless run extended to five games after a 1-1 draw against second-place Philadelphia Union.

Didier Drogba opened the scoring for Montreal in just the 3rd minute but Charles Sapong's goal in the 24th minute saw the game finish all-square.