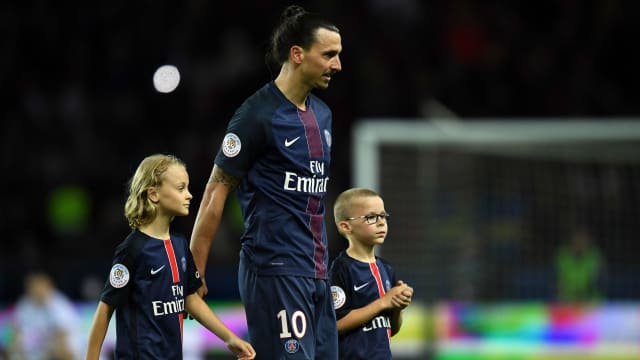 Zlatan Ibrahimovic made Ligue 1 history in his final home match for Paris Saint-Germain as the champions ended the season with a 4-0 win over Nantes on Saturday.

The Sweden star, who will leave the club when his contract expires at the end of the campaign, opened the scoring at Parc des Princes to draw level with Carlos Bianchi's record of 37 goals in a single league season.

Lucas Moura and Marquinhos each found the net before Ibrahimovic powered in a header in the 89th minute to take the record outright and earn a second standing ovation of the match as PSG concluded their league season in winning style.

Monaco clinched third place and a Champions League qualifying spot with a 2-0 win over Montpellier, courtesy of Ivan Cavaleiro and a penalty from Fabinho, with Nice finishing a superb campaign in fourth after Alassanne Plea scored twice in a 3-2 win away to Guingamp.

At the other end of the table, Toulouse produced a dramatic comeback to secure survival, coming from 2-1 down to defeat Angers 3-2 away from home.

Goals from Billy Ketkeophomphone and Said Benrahma, either side of Wissam Ben Yedder's strike, looked to have condemned the visitors to relegation before two goals in two minutes from Martin Braithwaite and substitute Yann Bodiger secured a priceless win.

Toulouse subsequently finish 17th, with Gazelec Ajaccio - beaten 1-0 by Lorient - heading into Ligue 2 along with bottom club Troyes, who drew 1-1 with Marseille, and Reims, whose 4-1 thrashing of second-placed Lyon proved to be in vain.

Eder's penalty secured a 1-0 win for Lille away to Saint-Etienne, ensuring the visitors leapfrog Christophe Galtier's side for a top-five finish, while Caen beat Bordeaux 1-0 to climb into seventh at the expense of Rennes, who lost 2-1 at home to Bastia courtesy of two goals from Francois Kamano.