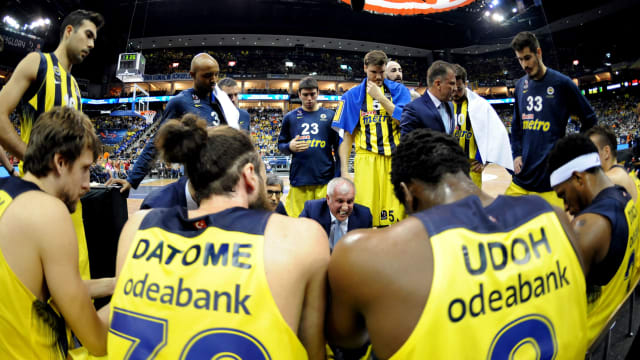 Fenerbahce will contest their first Euroleague final when they face six-time European champions CSKA Moscow in Berlin on Sunday.

Having never progressed beyond the Final Four, Fener made history after outlasting Laboral Kutxa in overtime on Friday.

Inspired by Bogdan Bogdanovic, Fener triumphed 88-77 to advance to the showpiece decider in the German capital.

But with Zeljko Obradovic at the helm - the most successful coach in Euroleague history with eight titles - six-time Turkish champions Fener are determined to cap their historical run in winning fashion.

"We have a lot of players with experience in my team. Thank you to my players for everything they did and also to our people," Obradovic said via Euroleague's official website of his team, which consists of eight different nationalities.

"We are a small United Nations at Fenerbahce. We wrote 'One more game' on the wall in all the languages of the team. But we want to do something else. The final game is the final game."

Standing in the way of Fener and being crowned European champions are CSKA and Euroleague MVP Nando de Colo.

CSKA are no stranger to big games in Euroleague, having won six titles.

However, it has been slim pickings for CSKA following their successful 2008 campaign, with Friday's 88-81 victory against Lokomotiv Kuban securing the Moscow team's spot in the final for the first time since 2012.

"In the past we had enough unluckiness and stupid losses, so I think we learned or lessons and those will not happen to us again," said Milos Teodosic.