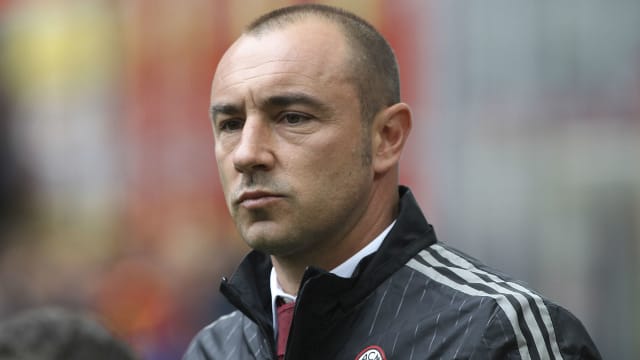 Cristian Brocchi has challenged his players to show they are worthy of a Coppa Italia final spot as AC Milan close their Serie A season against Roma.

Milan will secure sixth place and a guaranteed Europa League spot if they overcome Luciano Spalletti's in-form side and rivals Inter do them a favour in taking points off Sassuolo.

Otherwise, Milan's only route into Europe next season will be by beating Juventus and preventing the Serie A champions from making it back-to-back doubles in next weekend's Coppa Italia final.

It is a showpiece occasion that Brocchi hopes will motivate rather than distract his squad on Saturday at San Siro.

"Tomorrow is a huge match," he told a pre-match news conference "I will be assessing which players I can then rely on for the cup final.

"Those who play have to show me how much they want it and have the right attitude ahead of the final.

"In this short space of time available, I have tried to give everyone a chance."

The game could see Francesco Totti bring down the curtain on his glittering, career-long association with Roma.

The 39-year-old former Italy forward has been among the goals in recent weeks and Brocchi is a keen admirer of the veteran, who is out of contract next month.

"I hope Totti plays," he said. "He has made history in the game and he has treated us to so many great moments."

Brocchi's own future is up in the air, with the former youth-team coach having been promoted to replace Sinisa Mihajlovic until the end of the season last month.

"I live for the moment because I know that news will come over my future," said the 40-year-old, whose side ended a run of three matches without a win by battling to a 1-0 triumph over 10-man Bologna last time out.

"I am honoured that the president chose me for the work I did with the youth team. He chose me for my methods and this is my strength.

"Should the president change his mind, I would always be grateful regardless for the rest of my life.

"I will accept any decision gladly, safe in the knowledge that I have lived my dream and happy with what I have done in these 30 days."