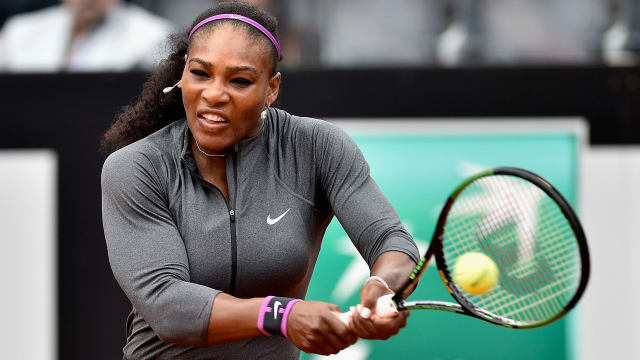 Serena Williams held strong to defeat Christina McHale in the third round of the Internazionali d'Italia on Thursday, while Garbine Muguruza breezed past Jelena Ostapenko.

Although Williams overcame qualifier McHale in straight sets, the result did not quite show the struggles the world number one endured.

After a shaky start, the three-time winner in Rome managed to edge the opening set before charging on to victory and setting up a last-eight clash with Svetlana Kuznetsova.

There were no such troubles for third seed Garbine Muguruza, however. The Spaniard comfortably booked her place in the quarter-finals by downing 18-year-old Ostapenko 6-1 6-4.

Timea Bacsinszky awaits her in the next round after the resilient Swiss dispatched of Carla Suarez Navarro, while Misaki Doi is the lowest ranked player remaining in the competition at 45th in the world after beating Johanna Konta.

After failing to take advantage of two set points, top seed Williams produced a crucial break at 7-6 down and, seemingly galvanised, she marched on to take the advantage.

It was a different story in the second set - which lasted less than half as long as the first - as Williams gathered her composure and raced into a 7-6 (9-7) 6-1 triumph.

The disappointment of a second-round defeat on home soil to Irina-Camelia Begu at the Madrid Open appears to be well behind Muguruza.

The third seed suffered a break to trail in the second set but had no difficulty in stepping up her performance to see of her Latvian opponent.

Buoyed by having booked a quarter-final spot, Muguruza joked with the packed media room post-match: "Is [Roger] Federer coming in here next or... I'm not that famous!"

Having worked her way back into the top 10 by winning the Grand Prix SAR La Princesse Lalla Meryem and impressing in Madrid, the Swiss came within two points of defeat against Suarez Navarro.

Bacsinszky proved her mettle to force a crucial break at that point before completing a 5-7 7-5 6-2 victory.

Barbora Strycova made light work of Eugenie Bouchard, winning 6-1 6-0 to set up a last-eight encounter against Madison Keys, who sent Timea Babos packing 7-6 (7-2) 6-3.