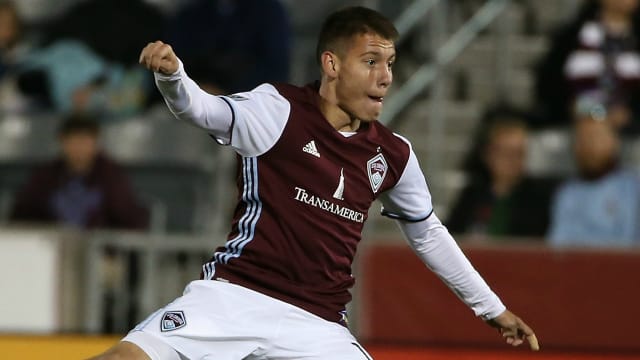 Western Conference-leading Colorado Rapids made it six MLS games without defeat with a hard-fought 1-0 victory over slumping Sporting Kansas City.

Dillon Serna was the hero on Wednesday, his 78th-minute goal lifting the Rapids past Sporting KC and to a sixth consecutive win in Colorado this season.

After Sporting KC defender Ike Opara was sent off for a second bookable offence 14 minutes from time, Colorado went up to the other end two minutes later and consigned the visitors to a seventh winless match via Serna's long-range effort.

The Rapids are three points clear in the west, while Sporting KC are nine points adrift in seventh position.

FC Dallas are second behind the Rapids, who have a game in hand, following their 2-1 win at home to defending champions the Portland Timbers.

With scores deadlocked after Perez's 36th-minute opener was cancelled out by Kennedy Igboananike in the second half, the Whitecaps star was at it again thanks to a late bicycle kick to seal the points.

Philadelphia opened the scoring in the fourth minute courtesy of Vincent Nogueira before the Galaxy hit back through Robbie Rogers and Mike Magee.

Second-placed Union, though, earned a share of the spoils when Keegan Rosenberry scored his first MLS goal just past the hour-mark.