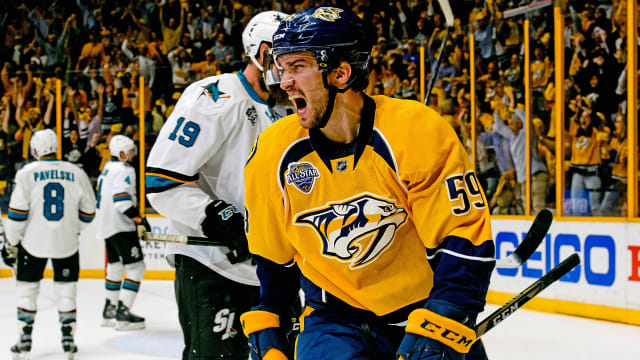 The Nashville Predators and the Dallas Stars forced seventh and deciding games in their respective NHL Stanley Cup play-off series' against the San Jose Sharks and St Louis Blues.

Viktor Arvidsson was the hero for the Predators, scoring early into overtime to seal a 4-3 win and tie their second-round Western Conference series against the Sharks on Monday.

The Sharks were in control in the first period as they looked to wrap up the series at the Bridgestone Arena, with Chris Tierney scoring twice within two minutes.

The Predators hit back through Roman Josi and then Ryan Johansen early in the second period, but Logan Couture scored 10 minutes, four seconds in the final period to restore the Sharks' lead.

However, it lasted all of two minutes, with James Neal setting up Colin Wilson to send the game into OT, where Arvidsson scored the winner just two minutes in, tying the series at 3-3.

The Stars forced a game seven after holding on for a 3-2 victory over the Blues in their second-round play-off series.

A three-goal first period set the Stars up for the win in game six, levelling their Western Conference series at 3-3 in St Louis.

Blues duo Alexander Steen and Patrik Berglund scored in the second and third period respectively to ensure a tense finish at the Scottrade Center, but it was not to be.

The Stars had an early 2-0 lead in the first period thanks to goals from Mattias Janmark and Vernon Fiddler just 20 seconds apart.

Jason Spezza scored on the power play at 16 minutes, 49 seconds in the first period, which proved to be the game-winning goal.

Stars goaltender Kari Lehtonen made 35 saves in the win, including a crucial stop on Jaden Schwartz in the final seconds to preserve their one-goal lead.