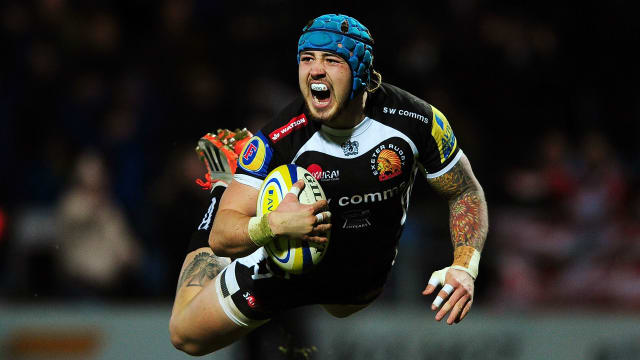 Quins were aiming to secure one of the two remaining places in the top six to play at Europe's top table next season and were one point ahead of Sale before Saturday's final regular-season matches.

However, Chiefs had motivation of their own and ran riot in the second half at the Stoop by outscoring Quins 45-14.

James Short, Jack Nowell and Dave Ewers all scored inside 20 minutes for Chiefs, but only one of those tries was converted and Danny Care's converted score on the stroke of half-time meant there was just a seven-point difference.

But it was one-way traffic after the break. Nowell scored twice to complete his hat-trick either side of Short's second, while Phil Dollman, Will Chudley, Henry Slade and Julian Salvi also scored in the 10-try blitz to ensure second place at the end of the regular season.

Northampton Saints did their bit to earn a top-six berth with George North scoring twice in a 28-20 win at Gloucester.

And it was Sale who crept in ahead of Quins with a 21-15 victory at Newcastle, despite Nili Latu's hat-trick for the hosts.

Sale led by just five points at the break and Latu's third tied things up, but two Joe Ford penalties inched the visitors ahead and that proved crucial for Steve Diamond's side.

Chris Ashton scored a hat-trick as champions Saracens, already guaranteed to finish top ahead of the play-offs, ran out 43-19 winners at Worcester Warriors.

Leicester Tigers will be Sarries' opponents in the play-offs and they suffered a disappointing 38-27 loss at Bath, while Wasps - who face Chiefs - saw off already-relegated London Irish 38-12.