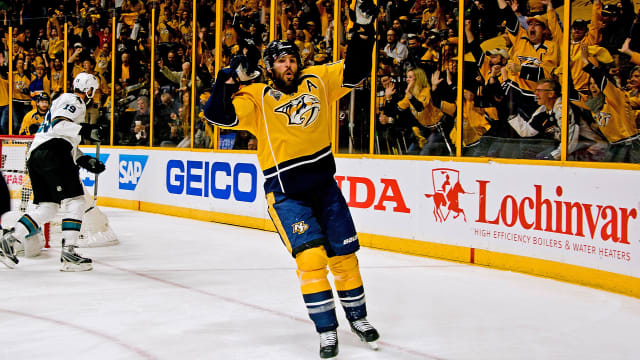 The Nashville Predators won an incredible triple-overtime thriller on Thursday to level their NHL play-off series against the San Jose Sharks.

Mike Fisher scored the winner 11 minutes, 12 seconds into third OT as the Predators edged to a 4-3 win.

His goal saw the Predators square the Western Conference semi-final series at 2-2.

The game started with a flurry of goals, with three scored in the opening 10 minutes.

Fisher and Colin Wilson scored either side of a Brent Burns goal to put Nashville up after the first period.

Joonas Donskoi scored his third of the play-offs to level the scores at 2-2 heading into the third period.

Burns nabbed his second in the third to make it 3-2, but with less than five minutes remaining James Neal made it 3-3 to force overtime.

Fisher would eventually breakthrough to give the Predators a crucial win.

The Dallas Stars hit back against the St Louis Blues, with Cody Eakin proving the hero in a 3-2 overtime win.

The Stars hit back after the 6-1 mauling dished out by the Blues in game three, to tie the series at 2-2.

Vladimir Tarasenko, Radek Faksa, Patrick Sharp and Paul Stastny had scored before Eakin netted his first of the play-offs at the perfect time, less than three minutes into OT.