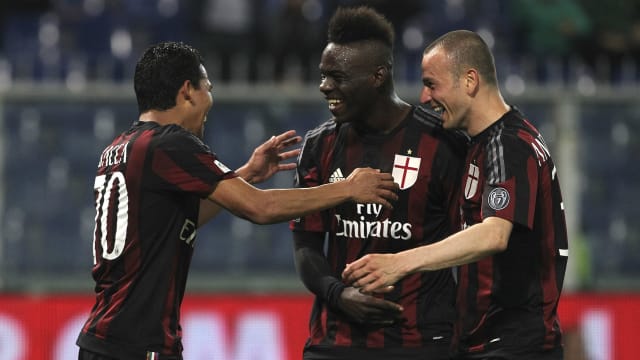 AC Milan interim boss Cristian Brocchi says the players have left him in no doubt that they want to qualify for the Europa League.

A section of the club's ultras released a damning statement this week in which they accused CEO Adriano Galliani of deliberately favouring a money-spinning friendly with Bayern Munich over the prospect of a Europa League qualifying tie in July.

Milan can secure a place in the group stages should they win the Coppa Italia final against Juventus, while a top-six finish in Serie A will see them earn the chance to progress through the qualifiers.

And Brocchi is confident in the squad's determination to bring European football back to San Siro, such has been their application in training this week.

"Last week our pre-game training session started off slowly. This week we started off at a million miles an hour. I hope it is a positive sign," he said on Friday, ahead of the trip to Bologna.

"The players have worked hard and with the right desire and with the right attitude, especially in the more intense training sessions. I have got the responses I was looking for. I hope they can now repeat this in tomorrow's [Saturday's] match.

"The players want to qualify for the Europa League. There is no doubt about it. Based on the determination and listening to the comments from the players, I cannot think anything but that. The players are either actors or I have to believe in their words and assess their actions."

Brocchi has described the match with Bologna as a pivotal moment for Milan's season, but says it is down to president Silvio Berlusconi to pass judgment on his achievements in his short time in charge.

"Only those who are observing us up close can judge the job we are doing," he said. "The results influence opinions. The president knows this.

"Tomorrow is the acid test for the team. I am the coach and I will always protect my players providing they show determination and desire. I have to get the best out of them. "

Brocchi confirmed that Jeremy Menez will miss the game as a result of a minor back complaint.