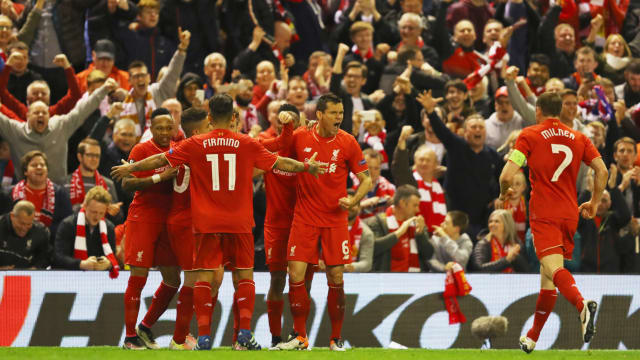 Dejan Lovren said Liverpool needed each and every one of the supporters that turned out to Anfield for their 3-0 crushing of Villarreal in the Europa League semi-finals.

In fact, Lovren said the home support was even more important to their victory than it was against Borussia Dortmund in the quarter-finals.

The defender was in good form as Liverpool kept a clean sheet in front of their own fans and Lovren was full of praise for the crowd who were unrelenting throughout.

"It was a beautiful game. I think everybody enjoyed watching the game," the defender told the club's website.

"We didn't expect this result but we believed from the beginning. As I said before the game, everything is possible here at Anfield, it's tough for every opponent to play here and expect something.

"The 12th player helped us today, our fans, the atmosphere was really amazing - even better than against Dortmund. It was an amazing game."

And Lovren was keen to praise his team-mates, who put in a thoroughly professional performance.

"We needed just to play our game and be confident in every situation [then] when we attacked we needed also to defend smartly at the same time," the Croatian said.

"I would say we had almost a perfect game. We didn't step back, we were always on the front foot, and so I think it's a deserved win.

"They are not fourth in the Spanish league without reason, they're a really good defensive team.

With a spot in the final booked, Lovren insisted no-one was getting ahead of themselves with three Premier League fixtures still to play.

"We still have a couple of games in the Premier League to play, we need to be concentrated, [take it] step by step," he added.

"We don't need to think of the final now, everything will come day by day.

"We need to just be calm and confident and hopefully without injuries so we can play with a full squad in the final."