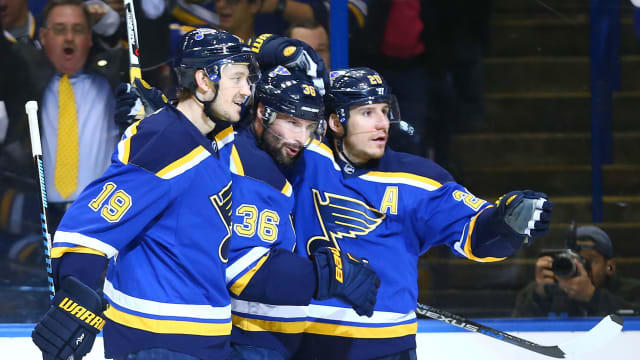 A dominant St. Louis Blues crushed the Dallas Stars 6-1 to take the lead in the second round of their NHL Stanley Cup play-off series.

Alexander Steen and David Backes scored twice as the Blues went 2-1 ahead in their Western Conference series at the Scottrade Center.

However, it was the Stars who scored first, with Colton Sceviour finding the net 4 minutes, 44 seconds into the opening period.

But it did not take long for the Blues to hit back, with Steen scoring less than a minute later, and Backes putting them ahead before the end of the period.

Goals from Troy Brouwer, Vladimir Tarasenko and Steen's second put the Blues 5-1 up in the second period, before Backes sealed the big win at the end of the third.

The Tampa Bay Lightning needed overtime to secure a thrilling 5-4 win over the New York Islanders at the Barclays Center.

Brian Boyle scored 2:48 into OT to seal the win and move the Lightning 2-1 ahead in their second-round Eastern Conference series.

The lead changed three times in regulation time, with the Islanders leading twice before the Lightning managed to tie the game.

Cal Clutterbuck thought he had the game won for the Islanders with his third-period goal, but Nikita Kucherov scored with 39 seconds on the clock to send the game into OT, where Boyle scored the winner.

The Nashville Predators stopped the San Jose Sharks from going 3-0 in their second-round series thanks to a hard-fought 4-1 win.

The Sharks struck first through Patrick Marleau in the opening period but the second and third belonged to the Predators.

James Neal and Shea Weber scored to put the Predators ahead, with Colin Wilson and Filip Forsberg wrapping up the result in the final period to keep their hopes of progressing alive.