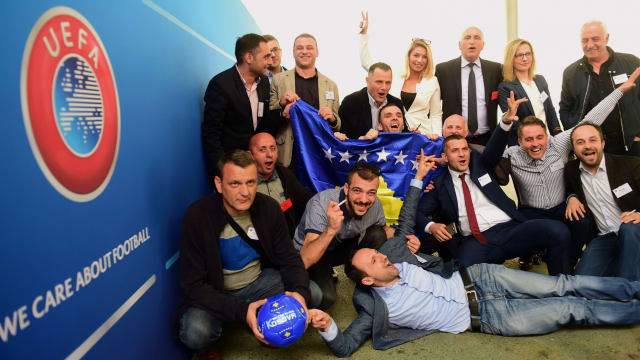 Kosovo have been approved as the 55th member nation of UEFA after a close vote at Tuesday's congress.

Member federations voted 28-24 in favour of accepting the fledgling nation, while two votes were invalid.

The news means Kosovo's application to join FIFA - confirmed by world football's governing body last month - could now be fast-tracked with a view to allowing them to compete in the qualifying stages of the 2018 World Cup.

That request could be approved at the FIFA Congress in Mexico City on May 13.

Kosovo have sought international recognition through sport ever since seceding from Serbia - who have strongly opposed their inclusion into UEFA - in 2008.

Fears have also been expressed in neighbouring nations that a number of players could attempt to change their international allegiance should Kosovo be ratified by both FIFA and UEFA.

Manchester United winger Adnan Januzaj - who elected to play for Belgium - is of Kosovo descent, as are Switzerland stars Xherdan Shaqiri, Granit Xhaka and Valon Behrami, all three of whom have endorsed their membership campaign in the past.

Manchester City youngster Bersant Celina, a Norway youth international, declared his intention to play for Kosovo as a senior earlier this year.