Halep cruises through, Cibulkova battles back in Madrid 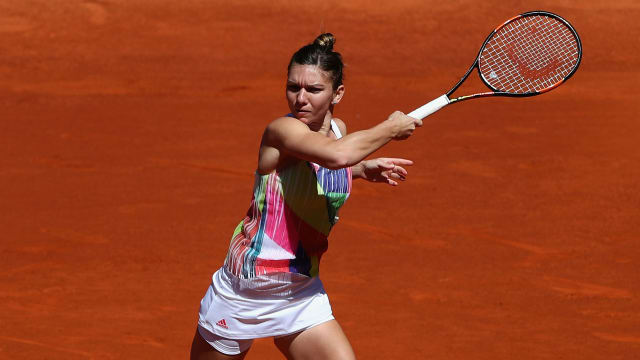 After seeing nine seeds already tumble out of the Madrid Open, Tuesday provided some brief respite as three of the four in action reached round three.

Simona Halep, Timea Bacsinszky and Carla Suarez Navarro all came through their second round matches in the Spanish capital, the trio joining Victoria Azarenka and Petra Kvitova as the only seeds left in the last 16.

Only Bacsinszky dropped a set of the three, the 10th seed needing a decider against Ekaterina Makarova to set up a clash with Halep, who breezed past Karin Knapp 6-1 6-1.

Navarro had an equally comfortable day against Sabine Lisicki, the Spaniard battling through despite a chest infection, while Sorana Cirstea defeated Danka Kovinic in straight sets.

The only seed not to progress on day four was Lucie Safarova, the Czech forced to withdraw from her clash with Sam Stosur due to food poisoning.

Sixth seed Halep rattled off eight successive games after being broken in the opener against Karin Knapp, the Romanian exposing her Italian opponent's lack of movement due to knee surgery in September and a recent ankle problem to win in little over an hour.

"We shouldn't forget that she was injured, she had knee surgery, so she's coming back and it wasn't her best day," Halep said. "But I still played some good tennis. I tried to stick to my game."

After her victory over Agnieszka Radwanska in round one, things looked to be going wrong for Dominika Cibulkova as Caroline Garcia took the opening nine games.

However, Cibulkova avoided a double bagel and produced a stirring fight back to win 0-6 6-3 6-4.

SAFAROVA AND GIORGI UNABLE TO COMPETE

Stosur was given a walkover victory against Safarova after the latter became the latest to succumb to the bug affecting the tournament, while injury ended Giorgi's hopes.

Her first round victory over compatriot Sara Errani came at a cost, the Italian withdrawing with a back problem prior to her meeting with Anatasia Pavlyuchenkova.

The highest seed remaining in the draw - Victoria Azarenka - returns to action on Wednesday, the world number five looking to make it 17 in a row against third-round opponent Louisa Chirico.