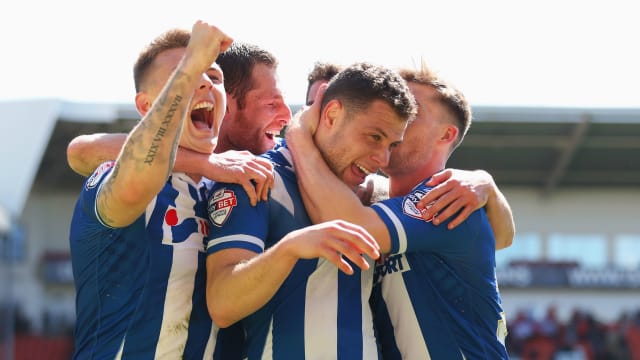 Wigan Athletic confirmed their return to the Championship, Burton Albion took another step towards promotion and Sheffield Wednesday booked their play-off place on Saturday.

Accrington Stanley and Oxford United both won to move closer to promotion from League Two and Doncaster Rovers and Blackpool slipped closer to the drop in League One.

Chris McCann put Wigan ahead after a goalless first half at Bloomfield Road, Yanic Wildschut hit a brace and Will Grigg added a fourth to seal a convincing 4-0 win against Blackpool, who will be relegated for the second successive season if Fleetwood Town beat Walsall on Monday.

Burton required an injury-time winner from Tom Naylor to seal their 2-1 home win against Gillingham, whose play-off hopes in the third tier were dealt a major blow.

Wigan are effectively League One champions as they are three points clear of Burton with a game left and have a vastly superior goal difference.

Doncaster Rovers are almost certain to be demoted to League Two after they were beaten 3-1 at already-relegated Crewe Alexandra in a game delayed for half an hour by stormy weather.

In the Championship, Wednesday secured their play-off spot with a 3-0 win against Cardiff City at Hillsborough, Gary Hooper scoring a brace for the hosts. Hull City lost 1-0 at Bolton Wanderers.

Stanley are on the brink of promotion to League One after Mark Hughes' late goal earned a 1-0 win at Wycombe Wanderers, leaving John Coleman's side two points clear of fourth-placed Bristol Rovers, who crushed relegated York City 4-1.

Chris Maguire and Liam Sercombe were on target in a 2-0 victory for Oxford, keeping Michael Appleton's men above Bristol Rovers, but the League Two promotion race will go down to the final day.

AFC Wimbledon sealed their play-off place with a 0-0 draw at Stevenage, with Portsmouth and Plymouth Argyle already confirmed in League Two's top seven.