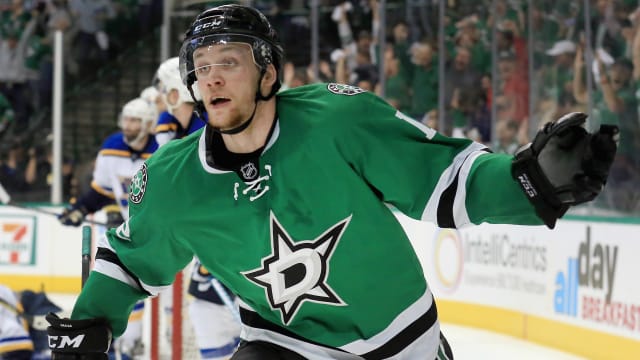 The Dallas Stars kicked off their NHL Stanley Cup second-round play-off series against the St Louis Blues in fine fashion with a 2-1 win.

The Stars and Blues played out a tight affair in Dallas on Friday as neither side managed a breakthrough in the first period, with Radek Faksa proving the difference with four minutes, 44 seconds to play in the third period at the American Airlines Center.

Antoine Roussel scored the opener in the second period with his second goal of the play-offs coming after a rebound following Faksa's initial shot, giving the Stars a 1-0 lead.

Kevin Shattenkirk scored the equaliser with 8:28 remaining in the third period when his first-time slap shot evaded Stars goaltender Kari Lehtonen, who finished the match with 31 saves.

His opposite number Brian Elliott made 40 saves for the Blues, but he was unable to cover the rebound off an Ales Hemsky shot deep in the third, which allowed Faksa to skate in and score the winner.

Elsewhere, the San Jose Sharks put on a third-period masterclass to win game one of their series against the Nashville Predators 5-2.

The Sharks scored five times in the third period to win the game and take the initiative in the Western Conference series.

The Predators took the lead early in the second period as Mike Fisher put away his wrist shot with Ryan Johansen and Mattias Ekholm getting the assists.

They held on to take a 1-0 lead into the second intermission but found themselves level at 1-1 after Tomas Hertl scored for the Sharks 2:37 into the third.

Individual brilliance from Joel Ward, who directed the puck brilliantly through traffic before a tidy backhand finish gave the Sharks the lead, before Logan Couture sealed the win 15:16 into the third.

Johansen pulled one back for the Predators instantly, but late goals from Couture and Tommy Wingels made it a comfortable win in the end for the Sharks.