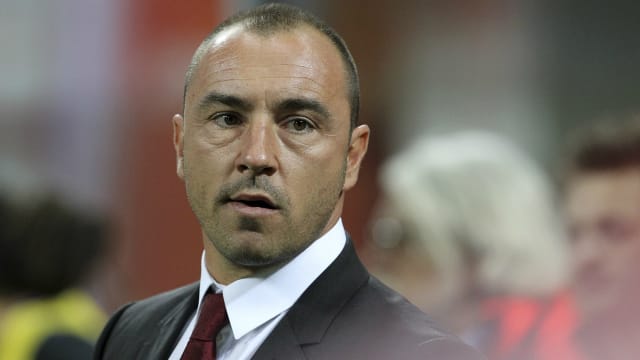 Cristian Brocchi does not have any regrets over taking the role as AC Milan caretaker boss and pointed out that even Pep Guardiola had a difficult start to his coaching career.

Milan have picked up four points from Brocchi's three Serie A matches since he took over from the sacked Sinisa Mihajlovic, the most recent being a 2-1 loss to bottom-of-the table Verona.

The Rossoneri sit sixth in the table, one point ahead of Sassuolo as they look to ensure they will have a place in next season's Europa League in case they suffer defeat to Juventus in the Coppa Italia final on May 21.

Ahead of the home match against struggling Frosinone on Sunday, Brocchi insisted he had no choice but to accept the offer to take over from the popular Mihajlovic.

He said: "If the chief offers you a top role, how can you say no? All coaches are criticised, even [Juve boss Massimiliano] Allegri was this season.

"I have my ideas and will continue with them whether I am at Milan next season or not. All great coaches had initial difficulties. Arrigo Sacchi, Pep Guardiola, even Maurizio Sarri needed two and a half months at Napoli to get his team playing this well.

"Having said that, the lack of time must not be a justification for me. I am trying to give something to my team and have been studying football for five years, so I have a fortified idea of the sport.

"I prefer to watch Barcelona and Bayern Munich, or if we want to be more close to home the way Napoli, Sassuolo and Empoli play.

"It's a difficult moment for everyone and we are all disappointed. I am responsible for the players and if they don't do what I ask, I have to take responsibility for that too."

Brocchi stressed he does not want to see negative football at Milan, but urged his team to work together more effectively in difficult moments.

"On Sunday, however, the result is too important. In Italy the number one rule is to get the three points, but that doesn't mean my team will be clammed up trying to counter to snatch a result. That has never been our approach.

"Not making Europe would be a collective failure - the fault would lie with me and the players. We are always here working, my staff and I only stop for the eight or nine hours per day we get to spend at home."