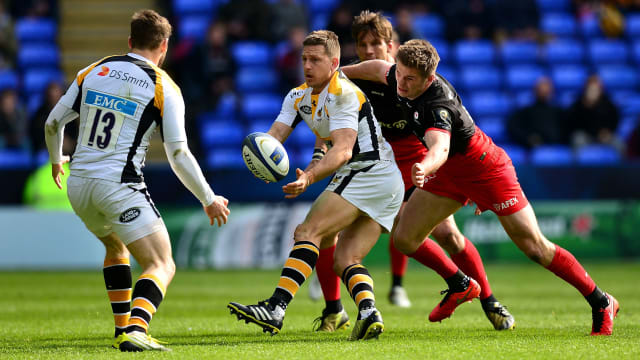 Saracens fly-half Owen Farrell will be free to play in the European Champions Cup final against Racing 92 after receiving a two-week suspension for a dangerous tackle during the semi-final win against Wasps.

England international Farrell was shown a yellow card after he clashed heads with Wasps scrum-half Dan Robson in the 51st minute of Sarries' 24-17 victory at the Madejski Stadium.

The 24-year-old was cited for an alleged dangerous tackle and has been punished by European Professional Club Rugby (EPCR) with a ban of two weeks.

Farrell avoided a 21-day suspension, which would have ruled him out of next month's final, due to his previous "disciplinary record, good character and excellent conduct at the hearing".

An EPCR statement read: "A disciplinary committee consisting of Simon Thomas (Wales), Chairman, Pat Barriscale (Ireland) and Antony Davies (England) heard evidence and submissions from Farrell, who did not accept that he committed an act of foul play, from Richard Smith QC, from England Defence Coach, Paul Gustard, and from Saracens Director of Rugby, Mark McCall

"In upholding the citing complaint, the committee found that Farrell had committed an act of foul play that warranted a red card. It determined that the offence was at the low end of World Rugby's sanctions and selected two weeks as the appropriate entry point.

"The committee added one week to the sanction as a deterrent in line with World Rugby's memoranda regarding dangerous tackles, and then reduced the sanction by one week due to the player's clean disciplinary record, good character and excellent conduct at the hearing, before imposing a suspension of two weeks."

Farrell will be able to return to action on May 9, meaning he will miss the Premiership matches against Newcastle Falcons and Worcester Warriors but will be eligible for the Champions Cup final against Racing 92 in Lyon on May 14.