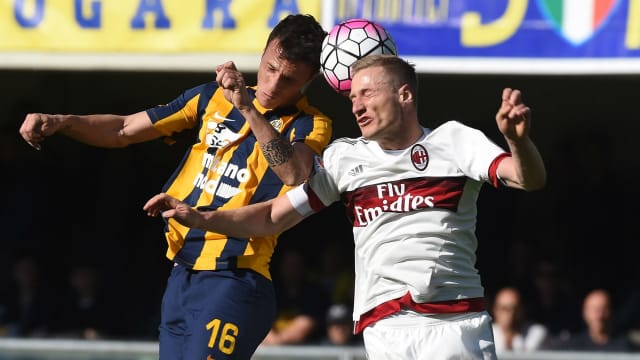 Luca Siligardi kept Verona's hopes of staying in Serie A alive by crashing in a free-kick with the last action of the game to hand his side a 2-1 win over AC Milan.

The bottom club came into Monday's clash at Stadio Marc'Antonio Bentegodi knowing anything other than a victory would see their three-year stay in the division come to an end.

And it looked as though they would fall short in their quest, with the scores level at 1-1 after former Milan striker Giampaolo Pazzini had cancelled out Jeremy Menez's first league goal of the campaign.

But, in the ffith minute of stoppage time, Verona were awarded a free-kick 20 yards from goal and Siligardi stepped up to rifle a stunning effort over the wall and in off the underside of the crossbar.

It was just Verona's fourth victory of the season, and took them to within seven points of safety with three games remaining, although their stay of execution will only prove a brief one if 17th-placed Carpi defeat Empoli later on Monday.

For sixth-placed Milan, it was a significant blow to their quest for European qualification, and a first defeat for head coach Cristian Brocchi following four points from his first two games after replacing Sinisa Mihajlovic earlier this month.

Pazzini was the first to threaten and ought to have opened the scoring in the eighth minute when he shot straight at Gianluigi Donnarumma after the visitors failed to deal with a long ball.

And Verona were left to rue that miss as Menez opened the scoring in the 21st minute.

Pierluigi Gollini was unable to hold Keisuke Honda's low 25-yard drive and Menez was quickest to react, following up to slot in the rebound from close range.

Menez went close to doubling his tally eight minutes later, but on this occasion Gollini was quick to race from his line and smother the Frenchman's effort.

Pazzini shot too close to Donnarumma for a second time after Cristian Zapata's dalliance in possession afforded him a chance, prior to Carlos Bacca seeing a goal correctly ruled out for offside.

Bacca should have found the net just before the hour mark but the Colombian attempted a rabona finish on the run when it was much simpler to score with a straightforward effort.

As the game opened up, Pazzini and Honda saw goalbound efforts blocked at either end, before Eros Pisano's excellent intervention denied Menez a second in the 68th minute.

The importance of that sliding block was underlined four minutes later as Verona were awarded a penalty.

Substitute Juanito met a left-wing corner with a powerful header, which struck Alessio Romagnoli on the arm after he had been wrestling with Pisano.

Donnarumma guessed right from the spot, but Pazzini's kick had too much accuracy and suddenly Verona smelled blood, Pazzini bringing two fine saves out of the goalkeeper in quick succession.

The 17-year-old excelled three more times, saving from Romulo twice and once from Pisano, but there was nothing he could do right at the death as Siligardi thundered his set-piece past the motionless keeper.