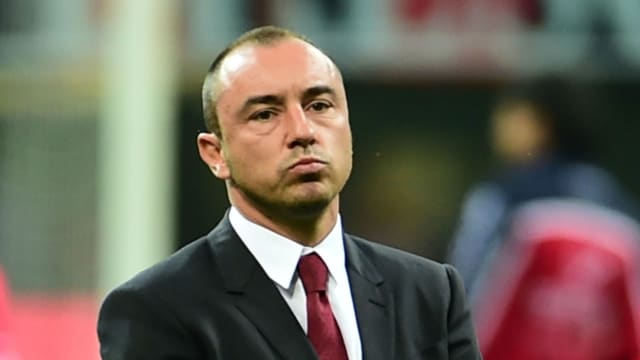 Cristian Brocchi has called on AC Milan to be more ruthless when they visit Verona.

Milan were jeered off the pitch by their fans after Thursday's disappointing 0-0 draw with relegation-threatened Carpi.

Monday sees Brocchi's team travel to another side struggling in Serie A, with bottom-placed Verona seemingly doomed in sitting 10 points adrift of safety with just four games remaining.

Milan have not scored more than once in a Serie A game since a 2-1 win over Genoa over two months ago, and Brocchi revealed they have been working hard to improve their attacking play.

"We are working on our mental approach and on our attitude - we must be more aggressive," he told Sunday's pre-match news conference.

"We must start our matches in a more aggressive fashion, to send a strong message to our opponents and our fans.

"I feel the amount of possession we had against Carpi is a step forward. After that game, the focus of our training has been on finishing in the final third of the pitch."

Milan's top scorer Carlos Bacca hit the headlines for the wrong reasons after the Carpi match, after reacting furiously to being substituted with 20 minutes remaining.

The Colombian subsequently apologised, and Brocchi insisted they have resolved their differences.

"With Carlos, it was important what we said in the changing room," he added.