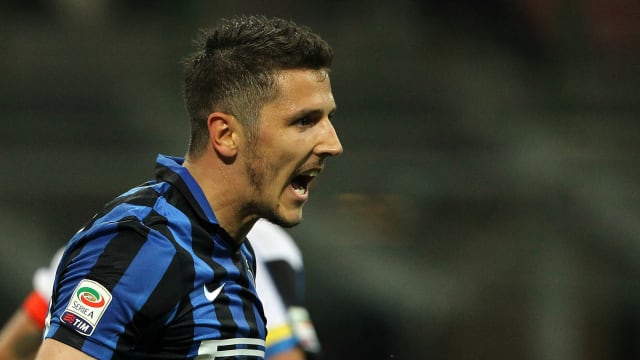 Inter's slim hopes of Champions League qualification were boosted as they came from behind to beat Udinese 3-1 at San Siro.

Cyril Thereau put Udinese into a shock early lead with his first touch of the game, volleying home a pinpoint lofted through-ball from Emmanuel Badu.

But Inter equalised before half-time, with Stevan Jovetic finishing off Mauro Icardi's pullback for a simple goal.

Jovetic got his second of the game 15 minutes from time, chesting in a terrific cross by Jonathan Biabiany, before Eder added a third deep in injury time in a game notable for it being the first in Serie A history to begin without any Italian players in either starting line-up.

It was Inter's first victory at home against Udinese in Serie A since September 2010 and Roberto Mancini's side close the gap to third-placed Roma to four points before Luciano Spalletti's team host second-placed Napoli on Monday.

Udinese took a surprise lead after nine minutes. Badu's ball over the top was superb and Thereau beat Samir Handanovic with a sweet volley from 14 yards.

Orestis Karnezis made a good save from a drive from Geoffrey Kondogbia, back for Inter after suspension, before Marcelo Brozovic had a fine chance but his shot was blocked.

Inter did equalise in the 36th minute, with Jovetic scoring his first Serie A goal since the reverse fixture in December.

Icardi did well to roll the defender and his low cross, which may have been intended as a shot, was tapped home by Jovetic.

Edenilson forced a fine save from Handanovic shortly after half-time and Silvan Widmer could not quite reach the rebound.

Widmer then teed up Bruno Fernandes, whose 20-yard strike caught the top of the crossbar, and the rapid pace of the second half continued when Karnezis superbly tipped Brozovic's shot around the post.

Jovetic tested Karnezis with a viciously swerving strike after 63 minutes, the goalkeeper shovelling the ball wide, before Icardi shot off-target from just outside the box.

Inter had not come from behind to win in Serie A all season, but they took the lead with 15 minutes to play.

Biabiany got down the right wing and produced a sublime cross, which Jovetic chested into the open goal from a few yards out with Karnezis nowhere.

Thereau and Widmer went close to equalising for Udinese and Handanovic made a superb block to deny Zapata, with Eder scoring his first Inter goal on the break to seal a sixth home victory for Inter in their last seven games at San Siro.