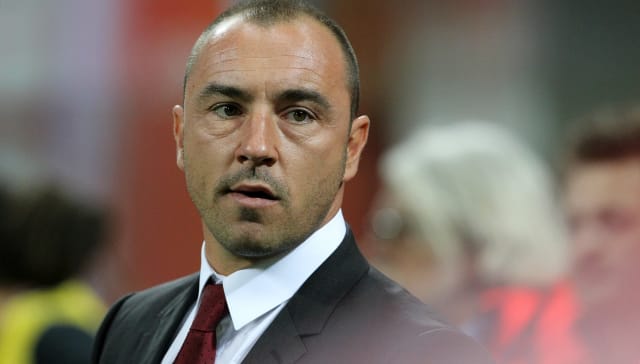 AC Milan coach Cristian Brocchi has warned Carlos Bacca that his bad reaction to being brought off "must not happen again".

Milan were jeered off the pitch by the San Siro crowd as they were held to a 0-0 draw by relegation-threatened Carpi.

Brocchi's side were unable to break down a resilient opponent on his home debut as they lacked the necessary urgency and creativity, although they could feel frustrated not to have been awarded a penalty in the closing stages for a handball.

Adding to Milan's woes, Carlos Bacca was replaced by Jeremy Menez in the 70th minute and left the pitch angrily, much to the disappointment of Brocchi.

"I am only disappointed he didn't shake Menez's hand," Brocchi told Sky Sport Italia and Mediaset Premium. "At that moment he was in a trance for the match, he reacted badly and it mustn't happen again, but as I said the worst part was not shaking hands with his team-mates.

"At the end of the day we need to work for a single objective and focus on the team, not ourselves as individuals. That is a very important rule.

"I replaced Bacca at that moment because I needed a player who could help out in the one-on-one situations."

Brocchi scraped to a win thanks to a goal from Bacca in his first game in charge as Milan kept alive their slim European chances.

But those hopes were dealt a huge blow with the Carpi draw as they dropped points for the third-straight home game, with Brocchi rueing their profligacy.

"I think what we lacked this evening was the finishing. We put balls into the box and tried to create chances, but were missing some of the determination to finish them off," he said.

"I always ask the strikers to seek each other out and help each other. Unfortunately today they were close by, but only shook off markers trying to get the ball to feet."