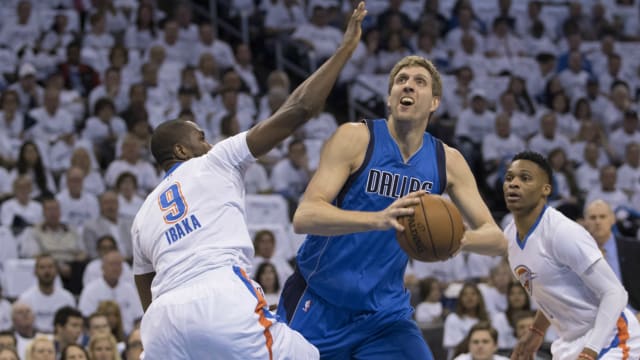 The Dallas Mavericks have levelled their first round NBA play-offs series against the Oklahoma City Thunder in the most dramatic fashion after an 85-84 triumph.

The Mavericks were completely outplayed in the first game of the series, losing by 38 points on Saturday, but they turned that around in front of their home fans to capture an important one-point win.

Steven Adams thought he had sunk the match-winning shot on the buzzer for the Thunder but it was disallowed upon review, sealing the win for the Mavericks.

Dallas held Oklahoma City to 33.7 per cent from the field as Raymond Felton bucketed 21 points for the winners and Dirk Nowitzki had 17.

Kevin Durant had a game to forget for the Thunder, despite scoring 21 points, making just seven of his 33 shots on the night.

The Toronto Raptors also tied up their series at 1-1 after a 98-87 win over the Indiana Pacers.

The Raptors looked out of sorts in the series opener, but turned it around on their home deck despite a big performance from Paul George.

George finished with 28 points for the Pacers, but the team performance from the Raptors won through, although Jonas Valanciunas did shine in a double-double effort that included 23 points and 15 rebounds.

Meanwhile, the Golden State Warriors had no worries going 2-0 up over the Houston Rockets without Stephen Curry, winning 115-106.

Curry sat out game two after rolling his ankle in the first match of the series, but the Warriors kicked on in style.

As expected, Klay Thompson filled the void, top-scoring for the Warriors with a career play-off high 34 points and he was well supported by Andre Iguodala (18 points) and Shaun Livingston (16).

Draymond Green notched a double-double with 12 points and 14 rebounds.

James Harden tried hard for the Rockets, finishing with 28 points, but it was not enough.