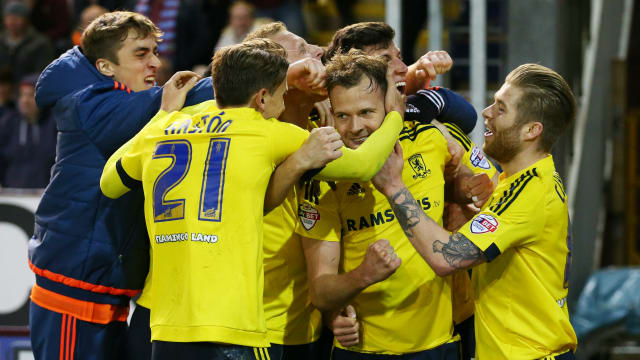 Michael Keane's injury-time equaliser earned Burnley a point at home to Middlesbrough on Tuesday, as Brighton and Hove Albion took full advantage of the top two drawing by recording another big win to close the gap.

Former Blackburn Rovers striker Jordan Rhodes put Aitor Karanka's Middlesbrough into a 70th-minute lead at Turf Moor and they looked set for a seventh straight league win, but Keane produced his second late leveller in five games, having recently rescued a 2-2 draw for Burnley at Brighton.

Middlesbrough's lead at the top is just two points after Brighton piled on the pressure and drew level on points with Burnley after an easy 4-0 home win against QPR followed their 5-0 hammering of Fulham last time out.

Sean Dyche's Burnley, now unbeaten in 20 league games, are in action before their rivals at the weekend with a trip to Preston North End on Friday giving them a chance to temporarily claim top spot, while Middlesbrough host Ipswich Town and Brighton travel to Charlton Athletic on Saturday.

Hull City and Derby County both won to confirm their places in the play-offs, with Steve Bruce's side 2-1 victors at Reading.

A 0-0 draw at home against Milton Keynes Dons edges Sheffield Wednesday, who had Ross Wallace sent off in the closing minutes, closer to confirming sixth spot and their play-off place.

Wednesday's cushion from Cardiff City - who lost 2-1 at Brentford - is now six points with three games remaining, while MK Dons are almost certainly relegated as they are now nine points adrift.

A 0-0 draw at already-relegated Bolton Wanderers sealed the fate of Charlton Athletic, whose relegation to League One was confirmed as they are now 11 points off safety.

Millwall's 1-0 home win over Fleetwood Town, secured by Steve Morison's strike shortly after half-time, moves the former to six points behind Burton, while Bradford City and Gillingham occupy the division's other play-off places.

Colchester United's 1-1 draw at already-relegated Crewe Alexandra does little for their own survival hopes and they are now eight points adrift, while Doncaster Rovers and Blackpool remain in the other relegation places after they also failed to win on Tuesday.

Accrington Stanley moved into second place in League Two, behind champions Northampton Town, after their 2-1 victory at Hartlepool United, with Oxford United dropping to third after their 1-1 draw at Newport County.

Cambridge United's 7-0 thrashing of Morecambe boosted their slim play-off hopes, with Harrison Dunk and Luke Berry each scoring a brace, while at the bottom York City kept their faint hopes of remaining in the Football League alive with a 3-1 home win against promotion-chasing Portsmouth, but Jackie McNamara's side are nine points behind Newport with three games left.