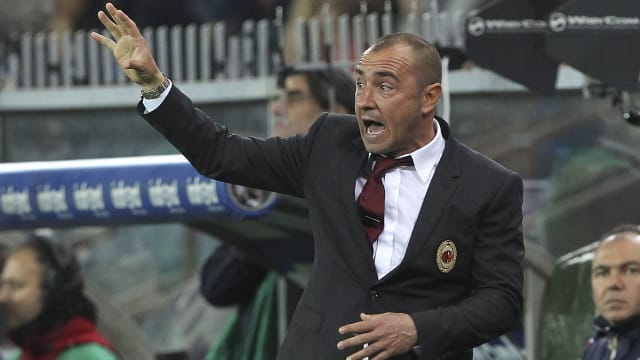 AC Milan interim coach Cristian Brocchi hopes his team can prove they are better than many give them credit for as they continue their push for a European place with a clash against Carpi.

Brocchi replaced the sacked Sinisa Mihajlovic at the helm on April 12 and led Milan to a 1-0 win at Sampdoria in his first game in charge.

A second-half goal from Carlos Bacca saw the club end a five-match winless run, leaving them sixth in the Serie A table, seven points adrift of Fiorentina.

Brocchi, a former Milan midfielder, hopes to see his team finish the season strongly to prove their doubters wrong.

"My players are not as poor as many would believe," he told Tiki Taka.

Milan host Carpi, who are in a relegation fight and sit a point clear of 18th-placed Frosinone with five games remaining, on Thursday.

Brocchi is still without M'Baye Niang, who suffered ankle and shoulder injuries in a car accident in February.

Mario Balotelli partnered Bacca up front at Sampdoria, but the on-loan Liverpool forward is without a goal since early March.

He has just one league goal this season, scored in September, and Bacca - with 15 - has had to shoulder most of the load for Milan up front.

Luiz Adriano is sidelined for the Italian giants, who were held 0-0 at Carpi earlier this season but won their Coppa Italia clash 2-1 in January.

Fabrizio Castori's Carpi have staged something of a resurgence with three wins from their past five league matches.

They beat Genoa 4-1 on Saturday to boost their survival hopes, but Castori knows a far greater challenge awaits at San Siro.

"On Thursday we go to San Siro against Milan," he said after his side's latest win.

"On paper it is a tough match but we'll try to bring a positive result. The team is fine and has a great physical condition that enhances the way we play.

"[We need] so much running to try to keep up with the higher technical level of the Rossoneri."