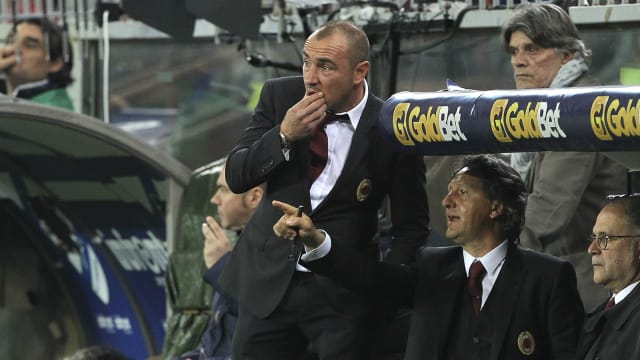 New AC Milan coach Cristian Brocchi praised his side's spirit as they won 1-0 at Sampdoria in Serie A and revealed he received a message from predecessor Sinisa Mihajlovic after the game.

Brocchi took the helm after Mihajlovic was dismissed this week following a five-game winless run that all but ended the club's hopes of a top-five finish.

And he started his tenure with a triumph on Sunday courtesy of Carlos Bacca's second-half strike to give the 40-year-old plenty of cause for optimism.

"I saw more than the five per cent new ideas I had been hoping for," he told Mediaset. "In many situations the players did exactly what I asked and [Sampdoria coach] Vincenzo Montella was even forced to change system during the first half."

Brocchi went on to praise the character of his team, something which was key as they squandered several opportunities to take the lead.

"The quality of a side is raised when the mentality holds strong," he added. "We tried to play in the opposition half and control the game, but there are still some principles missing that we need to work on a great deal."

Regarding Mihajlovic's message, he said: "I also wish to thank Sinisa, who sent me a congratulatory message for the victory. It was a sign of real class and I thank him."