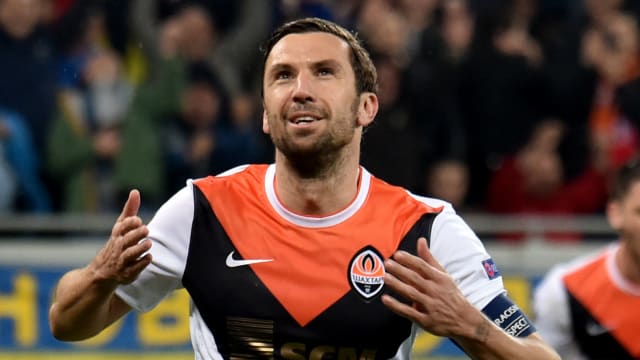 Dario Srna marked an emotional night with a goal as he broke the Shakhtar Donestk appearance record in their 4-0 Europa League quarter final victory over Braga.

The Croatian full-back, making his 486th appearance for the Ukrainian giants, scored after 25 minutes at L'viv Arena to increase Shakhtar's lead in a tie that had swung heavily in their favour with a 2-1 victory in the first leg in Portugal.

The home side added a second shortly before half-time when Ricardo Ferreira put through his own goal, but Braga coach Paulo Fonseca was left fuming at the break after his side were denied a penalty when Ahmed Hassan was brought down with the tie still poised at 2-1.

Viktor Kovalenko added a third goal early in the second half to make certain of Shakhtar's place in their first Europa League semi-finals since 2009, when they went on to win the competition, and a second Ferreira own-goal made the scoreline emphatic.

The result extended Shakhtar's run of consecutive wins in the competition to five, and few sides will relish being handed a trip to Ukraine in the draw for the last four.

Braga, wearing luminous yellow, started brightly and Luiz Carlos would have been clean through on goal if Srna had not cut out Rafa Silva's throughball.

The home crowd grew impatient as their side sat back and absorbed the early pressure from Braga, who had strong claims for a penalty waved away when Olexandr Kucher felled Hassan as the striker broke into the box.

The visitors' strong start was undone after 23 minutes when goalkeeper Matheus felled Kovalenko in the penalty area and the referee pointed to the spot.

The stadium fell quiet as the club's greatest servant stepped up to take the kick, and Srna made no mistake, burying the penalty in the bottom corner of the net beyond the outstretched hand of the diving Matheus.

Facundo Ferreyra almost added a quick second when he latched onto Taison's slide-rule pass and chipped a delicate shot onto the outside of the post, but the Argentine striker was in the right place to turn Srna's cross into the net via Ferreira's knee just before half-time.

Kovalenko's hard work throughout the first half paid off early in the second when he got on the end of another Srna cross and angled a shot into the net off the palms of Matheus to put the semi-finals out of Braga's reach.

Taison flashed the ball across the face of goal to Ferreyra but the chance went begging, and Kovalenko had a goal disallowed when the Argentine was caught offside.

Braga's night of misery was complete with 18 minutes left on the clock, when Taison carried Shakhtar forward in a superb sweeping move that ended with Ferreira bundling his second own-goal of the game into the net.