No player is safe under Pochettino, reveals Dembele 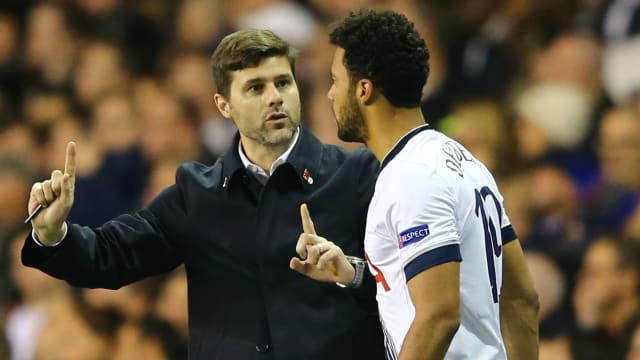 Mousa Dembele revealed that no Tottenham player feels their place in the team is safe under Mauricio Pochettino.

Spurs' impressive season has them sitting second in the Premier League, seven points adrift of Leicester City going into both sides' matches on Sunday.

Leicester are at Sunderland, while Tottenham host Manchester United and Dembele hailed the impact of Pochettino ahead of the game, insisting the head coach makes his star players work harder than any other team.

"If you don't fit into the team, it's going to be difficult for you," the Belgium international said to the Guardian.

"It's not only in terms of quality. You have to have a certain quality, but more important for him is how to press, how to be ready for the team, how to come back, determination - these kinds of things.

"If he explains something to you, OK, you can do it one or two times bad, but if he explains that he expects this from a player, like a midfielder, and you keep on doing it wrong, it's nothing to do with quality.

"Everybody knows, 'OK, I can be the best player in the team, but if I don't work, then it's not going to be good enough'. I think that's the difference.

"Of course, we have players who can make the difference, like Harry Kane, but even Harry knows: 'OK, I need to work.' And you see it.

"I don't know another striker who works harder than Harry. This puts him on another level to most other strikers."

Dembele hopes Tottenham have banished the reputation of being a soft touch when it was pointed out that Alex Ferguson used to reference that in his pre-match team-talks against Spurs.

"Yes, I know about this," he said. "Tottenham in the past, it was always that everybody liked Tottenham, but to make the step forward, it was different.

"You can't compare it to three years ago. You can feel that there is a different vibe. People respect us differently and know that they need to play against us like they play against a top team. So they have the respect.

"We feel like this is the start of a bigger Tottenham future."