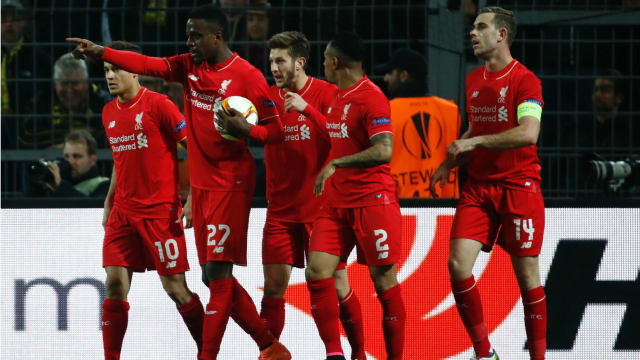 Dejan Lovren hailed Liverpool's defensive discipline as the Premier League side held out for a deserved 1-1 draw at Borussia Dortmund in the first leg of their Europa League quarter-final.

Divock Origi gave Jurgen Klopp's men a 36th-minute lead on their boss' return to Signal Iduna Park and the Belgium international spurned a glorious chance to make it two on the stroke of half-time.

Dortmund captain Mats Hummels made them pay for such wastefulness by heading a 48th-minute equaliser but the tournament favourites were unable to press effectively for a winner as Liverpool stifled the creativity that put Tottenham to the sword in the previous round.

Speaking to BT Sport, Lovren said: "To be honest we knew it would be a tough game. They were keeping the ball really well.

"We had also a couple of chances, Divock in the first half, to kill them.

"But it's a good result, 1-1 away and we have to do even better at Anfield. Definitely I am satisfied.

"It was a great job from everyone today. We had great discipline in defence from all 11 players.

"It was noisy, we couldn't hear each other, but it was a great defensive performance for us."

Origi was preferred to Daniel Sturridge up front for Liverpool and the Belgium international is hopeful his away goal has laid the foundations for a memorable triumph in next week's return at Anfield.

"I think today was a big game and, of course, in a big club you have responsibility," he told BT Sport.

"I had support from the whole club and I just tried to focus on the game. I was happy for the fans to score and I think we did well.

"We knew we were capable but we had to show it on the pitch. It could have been better but it's positive for the next game."