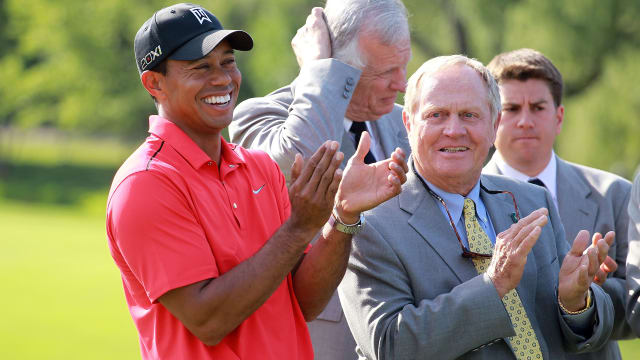 Jack Nicklaus backed the injured Tiger Woods to resume winning when he eventually makes his return from injury.

Woods will miss The Masters, which starts on Thursday, due to multiple back surgeries, with injuries having derailed the 14-time major winner's career.

Many golf pundits have questioned whether Woods can rediscover the form that made him the dominant force in the game, but Nicklaus - a winner of a record 18 majors - is convinced the 40-year-old can return to winning ways.

"I think really early on, my schedule - and Tiger has done much the same - I sort of focused on the major championships and I felt like my year was four tournaments and that whatever I needed to prepare for those four tournaments, that's what I did," he told a news conference.

"And so that's the way I looked at it. So when you do that, you're not abusing yourself too much. You can play a longer time.

"And [that's] why Tiger and I both won young. And he may span 25 years himself.

Nicklaus won 18 majors between 1962 and 1986, including claiming the title at Augusta on six occasions.

Now 76, he believes he missed out on a couple of other potential crowns.

"I think he led in the last round in, I guess he led going into all 14 of his majors, didn't he, every one that he won.

"But I guess I was just lucky from a physical standpoint. I never really had many injuries."