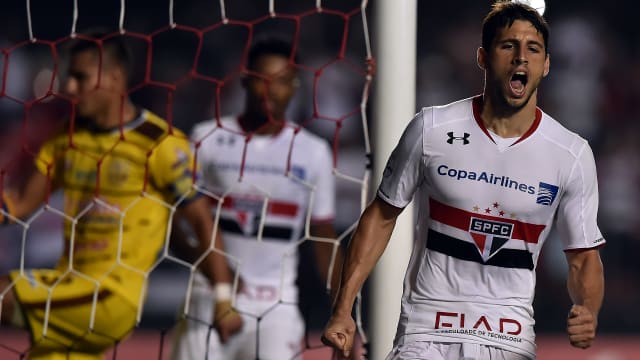 Jonathan Calleri's impressive four-goal haul against Trujillanos saw Sao Paulo claim a 6-0 win and their first of the 2016 Copa Libertadores on Tuesday.

Sao Paulo were 2-0 up inside 18 minutes at the Estadio do Morumbi with goals from Calleri and Kelvin, before Joao Schmidt added a third in the 25th minute.

Things did not get much better for the Venezuelan outfit in the second half, with Calleri getting his second of the night from the penalty spot in the 50th minute.

Calleri had the chance to score his hat-trick from the spot with 10 minutes left and saw his effort saved, but the Argentinian converted the rebound to make it 5-0.

The 22-year-old added his fourth in the 87th minute to round off the big win, taking Sao Paulo to second in Group 1, level on points with third-placed River Plate.

Huracan picked up a vital 4-2 home win over Sporting Cristal to boost their hopes of advancing past the group stages.

Santiago Silva put Sporting Cristal ahead in the 16th minute but a Ramon Abila brace turned the game on its head in Buenos Aires.

Horacio Calcaterra levelled things up just before the half-time break but goals in the second period from Alejandro Romero and Ezequiel Miralles sealed the win for Huracan.

The win moves the Argentine club two points above Sporting Cristal into second in Group 4 with two games left to play.

Toluca sealed their progression into the round of 16 courtesy of a 2-1 home win over LDU Quito.

Edson Puch gave Quito the lead in the 18th minute but Ernesto Vega hit back less than 60 seconds later to make it 1-1.

The winner came from Enrique Triverio in the 63rd minute to seal Toluca's progression, and leave Quito last in Group 6.

Meanwhile, Deportivo Tachira moved a step closer to the next round after Wilker Angel's lone goal sealed a 1-0 victory over Emelec, knocking the Ecuadorian club out.