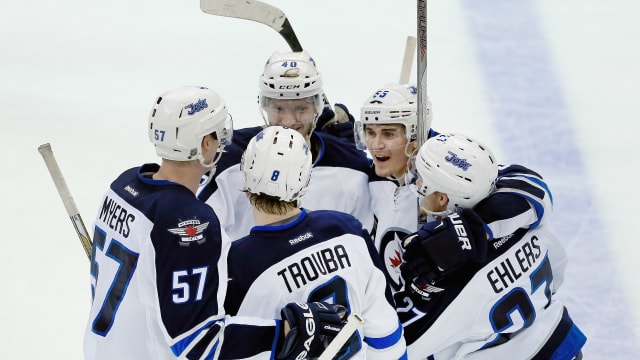 The Minnesota Wild missed out on the chance to clinch a NHL play-off berth after suffering a 5-1 loss to the Winnipeg Jets.

A Wild win combined with a regulation loss for the Colorado Avalanche would have sealed Minnesota's spot in the post-season.

However, despite the Avalanche losing 5-1 to the St Louis Blues, the Wild went down by the same scoreline to the Jets on Sunday.

Mark Scheifele put the Jets ahead towards the end of the first period before Chris Thorburn ensured they went into the final period 2-0 up.

Mikael Granlund pulled a goal back for the Wild eight minutes into the third period but Andrew Copp restored the Jets' two-goal advantage just minutes later.

Goals from Drew Stafford and Blake Wheeler sealed the big win for the Jets, while the Wild have to wait until Tuesday's clash with the San Jose Sharks to have a chance of booking their spot in the Stanley Cup play-offs.

The Pittsburgh Penguins dented the Philadelphia Flyers' play-off chances after their 6-2 victory.

Sidney Crosby and Beau Bennett scored within 65 seconds of each other to put the Penguins 2-0 ahead in the first period.

Patric Hornqvist made it 3-0 early in the second period before Wayne Simmonds got the Flyers on the board.

However, an Eric Fehr double and a goal to Carl Hagelin either side of Jakub Voracek's effort for the Flyers rounded out the big win for the Penguins.

Patrick Kane became the first United States-born player in 20 years to reach 100 points in an NHL season as the Chicago Blackhawks topped the Boston Bruins 6-4.

Kane's four-point haul, including a hat-trick and an assist for Artemi Panarin, led the Blackhawks.

Meanwhile, Ryan Kesler scored one and set up another as the Anaheim Ducks defeated the Dallas Stars 3-1.