The 10 most memorable Old Trafford goals in United's Premier League 1,000 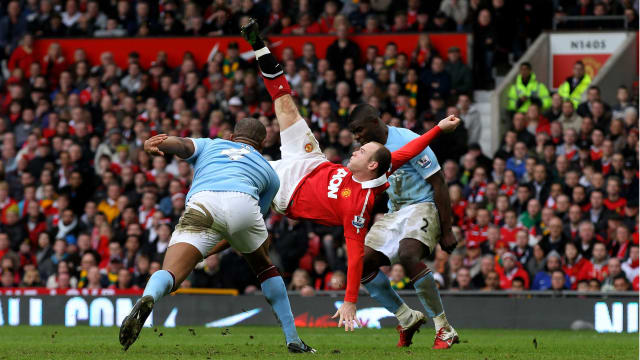 Manchester United brought up 1,000 Premier League goals at Old Trafford against Everton on Sunday when Anthony Martial netted in the second half.

Here, we look at 10 of their best league goals during the Premier League era:

Far from the most stylish of United's 1,000 - but almost certainly the most important. Alex Ferguson and his men were chasing a first league title for 26 years, having collapsed spectacularly to the benefit of Leeds United a year earlier. Wednesday led through John Sheridan's penalty until Bruce equalised five minutes from time. Deep into a lengthy period of stoppage time, United flung bodies forward in desperate pursuit of the win they needed to apply pressure on title rivals Aston Villa. The air of chaos was underlined by Gary Pallister retrieving a loose ball on the right wing and his deflected cross was powered home by his defensive partner to prompt on-field celebrations from Ferguson and assistant Brian Kidd. United won their remaining five league games and the title by 10 points as Villa collapsed.

The enigmatic talisman of Ferguson's great 1990s sides, Cantona's most sublime display of artistry crowned this dominant pre-Christmas win. The forward danced away from a pair of challenges with poise and balance before gliding towards the Sunderland goal. He exchanged passed with Brian McClair and wedged an audacious lob over helpless visiting goalkeeper Lionel Perez. Cantona then struck his iconic, chest-out peacocking pose - soaking in the deserved acclaim from the adoring Old Trafford faithful. He would retire, aged 30, at the end of the season after helping United to four league titles in five seasons.

A penalty box predator of the highest order, the middle goal in this hat-trick was not one you would normally associate with Van Nistelrooy. Having opened his account for the afternoon with a penalty on the stroke of half-time, the Dutch striker shrugged off Sylvain Legwinski on halfway and tore forward between a clutch of Fulham defenders. He skipped around Andy Melville on the edge of the box before opening his body to slot an unerring finish across goalkeeper Maik Taylor.

The argument that Rooney's game would lose something of his natural aggression and anger on the field were tempered has often been made during the England captain's career. A teenage Rooney offered the strongest evidence in favour of the theory when he began remonstrating with referee Neale Barry, with United 1-0 down to Newcastle. He pursued the official to continue the debate, a run that became a sprint when he saw what might unfold. Peter Ramage's headed clearance looped into the path of the furious tyro, who clattered an unstoppable volley past Shay Given from 25 yards.

Having opened the scoring thanks to a one-two with Portuguese compatriot Nani, Cristiano Ronaldo produced arguably the most scintillating moment of his United career and the one that most clearly indicated the greatness ahead at Real Madrid. Taking up his familiar stance 30 yards from goal, Ronaldo thumped a free-kick with an improbable combination of power, dip and accuracy that left Portsmouth goalkeeper David James a baffled spectator.

Sixteen years on from the original, 17-year-old Italian Macheda sensationally marked his United debut with his very own "Bruce moment". Ferguson's injury and suspension-ravaged squad had ceded ground to rivals Liverpool and the title race was on a knife edge. Ronaldo opened the scoring and equalised as a Villa side playing vibrantly under Martin O'Neill scored via John Carew and Gabriel Agbonlahor. With both sides pushing for a winner, Macheda produced a slick backheel turn from Ryan Giggs' return pass and curled majestically into the far corner.

Games between these two great rivals have tend to have a little bit of everything, although there was no United hat-trick for 64 years until Dimitar Berbatov came to the party. His second goal of the treble was simply stunning as he controlled on his thigh and volleyed home an overhead kick via the underside of the crossbar - all with nonchalant ease that led the Bulgarian to both delight and frustrate the masses during his time at Old Trafford.

The 158th Manchester derby had proved a frustrating outing for a peripheral Rooney, as City fortuitously cancelled out Nani's opener when Edin Dzeko's shot ricocheted home off David Silva. That all changed with 12 minutes remaining when Nani's cross clipped off Pablo Zabaleta to arc slightly behind Rooney. The England star pivoted and launched himself to acrobatically spear a volley beyond the helpless Joe Hart.

On a fervoured night at Old Trafford, when United wrested the Premier League trophy back from rivals City in what would prove to be Ferguson's farewell triumph, Van Persie fittingly provided the storybook moment. The Dutchman's choice of United over City as his next destination after Arsenal seemed ever-more decisive by the week as Roberto Mancini's team faltered badly in their title defence. Van Persie sumptuous over-the-shoulder volley from Rooney's raking pass - part of a match-winning hat-trick - gained him the English title he craved.

With the glorious Ferguson era fading from view, Anthony Martial became the most expensive teenager in world football on September 1, 2015. United were, not for the first time, accused of panicking and over-spending in the transfer market under Louis van Gaal. But the France international immediately set about proving he was the real deal on his debut from the bench, turning inside and outside a floundering Martin Skrtel and slotting confidently across Liverpool goalkeeper Simon Mignolet to spark jubilant celebrations.