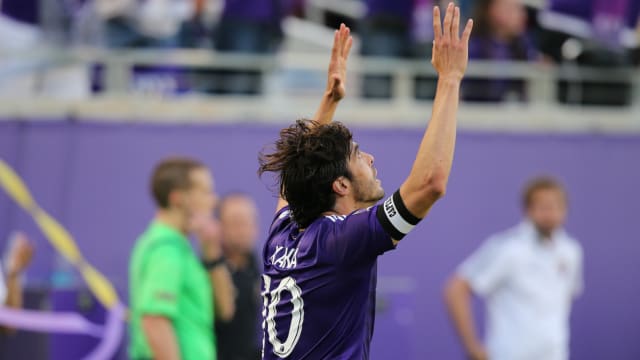 Kaka scored a goal and set up two others as Orlando City moved top of the Eastern Conference with a 4-1 demolition of reigning MLS champions Portland Timbers.

Making his first appearance of the season, Kaka teed up Sebastian Hines and Brek Shea in the first half before the Orlando captain scored a goal of his own in the 48th minute on Sunday.

Kevin Molino converted a penalty with 14 minutes remaining - his first MLS goal - to complete the rout as the home team stayed undefeated.

After new recruit and former Brazil international Julio Baptista was introduced to the crowd prior to kick-off, Hines headed Orlando into a 13th-minute lead, latching on to Kaka's free-kick.

Shea then produced one of the goals of the season to double Orlando's advantage just past the half-hour mark, initially stumbling before playing a give-and-go with Kaka and unleashing a powerful volley into the roof of the net.

The Timbers were offered an avenue back into the contest when Shea handled the ball inside the penalty area two minutes shy of half-time but Fanendo Adi had his spot-kick saved by Joseph Bendik.

Kaka made the visitors pay three minutes into the second half after placing a low shot beyond Adam Kwarasey, and Molino scored from the spot in the 76th minute.

Orlando, though, were denied a clean sheet after Jack McInerney scored an 89th-minute consolation goal.