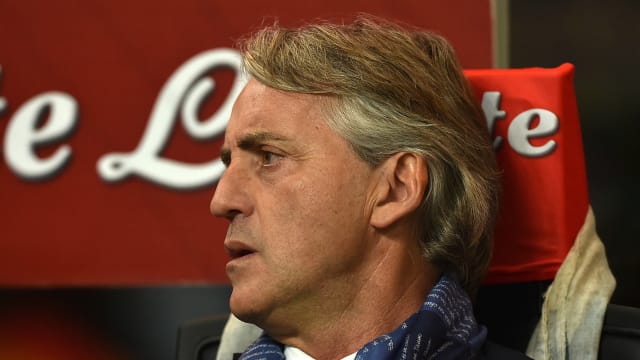 Inter head coach Roberto Mancini described refereeing decisions made in his team's 2-1 home loss to Torino on Sunday as "absurd" and accused the visitors' Andrea Belotti of cheating.

Mancini's men took the lead through Mauro Icardi's penalty but Cristian Molinaro hit a fine equaliser before Miranda was sent off for a second bookable offence when he slid in late on Belotti.

Torino striker Belotti then won a penalty when he went down under a challenge from Yuto Nagatomo, who received Inter's 10th red card of the league season, Belotti converting the penalty himself.

Mancini was angry and accused Belotti of trying to win a penalty with a "clear dive".

"This is a difficult game to comment on, because it should've been finished by the start of the second half. We lost a game that seemed impossible to lose," Mancini told Sky Sport Italia.

"There are periods of the season where things go your way and moments when you concede at every attempt. I think our problem is that we don't kill games off. It happened against Roma too, we needed to be more determined and finish it off.

"It's not possible every time at home we get players sent off and penalties awarded against us. Miranda's second yellow card was right, but the first booking did not exist. It struck him on the shoulder, so was not handball. These things only happen to Inter.

"As for Nagatomo's red card, that was absurd. You can tell even from a distance that Belotti is seeking contact with Nagatomo. There are five officials there, not one of them spotted a clear dive.

"There was a clear penalty not awarded to Icardi. I also admit our penalty was a mistake too, because a player can't cut his arm off when he slides in. In my view, those penalties should not be given in general."

Although Mancini railed against decisions that went against his side, he accepted that his team should have secured the points before half-time.

"The fact remains we should've finished it in the first half, when we had numerous chances and allowed Torino absolutely nothing," he said. "We were in total control.

"It's an issue of being clinical at certain moments of the game. We've always scored fairly few goals, we used to win 1-0, now one is not enough."