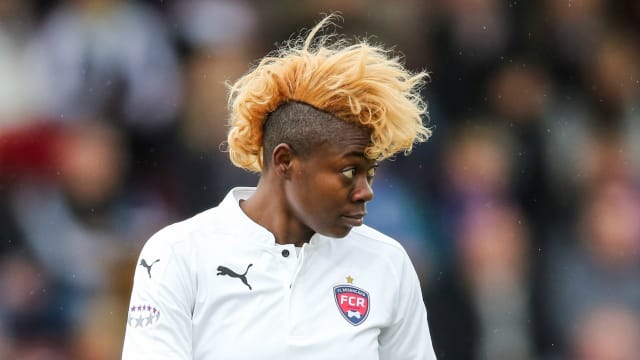 UEFA has opened disciplinary proceedings against Frankfurt after alleged racist behaviour by the club's fans in their Women's Champions League quarter-final win against Rosengard.

Rosengard forward Gaelle Enganamouit was named as a victim of racist abuse in the referee's report and UEFA will now investigate Wednesday's incident.

The official, Italy's Carina Vitulano, also paused the match for a short period during the second half and approached Frankfurt fans in order to deal with the issue.

"Disciplinary proceedings have been opened following the UEFA Women's Champions League quarter-final between Frankfurt and Rosengard played on March 30 in Germany," read a short UEFA statement.

The charge against Frankfurt is "Racist behaviour - Art. 14 of the UEFA Disciplinary Regulations" and the UEFA Control, Ethics and Disciplinary Body will reveal its findings on April 5.

Anti-discrimination and social inclusion network FARE described the racism as "depressing", while Enganamouit confirmed she was aware of the chanting.

"Yes, I heard what they were shouting," the Cameroon international told Swedish website Sydsvenskan. "I did not care. Such is football, and when you want to be the best, you must turn your head. I have not faced it before."

Brazil international Marta, five-time FIFA World Player of the Year, was also reportedly targeted by racist chants during the game.

Rosengard's coach Jack Majgaard Jensen condemned the racist behaviour during the tie, which his side lost 5-4 on penalties.

"It's f****** sad. Especially when it's at a player who has done so much for female football," he said. "It's clear they were booing and screaming, but when it becomes racist, and it's personal, it does not belong in football."