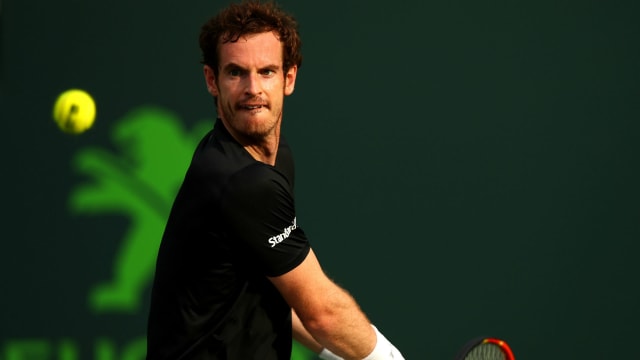 Andy Murray played down reports of a rift with coach Amelie Mauresmo after she was absent from his team box as the world number two was beaten by Grigor Dimitrov at the Miami Open.

Mauresmo watched on from a different part of the stadium as Murray threw away a first-set lead in the third round on Monday, Dimitrov fighting back to win 6-7 (1-7) 6-4 6-3.

However, Murray denied his French coach's location was due to a falling out and insisted it was all part of a plan to help him keep his cool on court.

"I've just been trying to find different ways to improve my focus on the court," Murray said in his post-match news conference.

"I also did the same thing at the O2 Arena [venue of the ATP World Tour Finals] as well, so I'm trying to find different ways to improve and that's something I've tested to see if that might help.

"If I'd had a falling out then Amelie wouldn't be here at the tournament. We had dinner with all our families last night, so we certainly haven't fallen out.

"It's one of those things that when I win no one says anything about it, and then when I lose that's an excuse. I don't think that is the reason for me hitting 50 unforced errors in this match."

Murray - a two-time winner in Miami - saw his game unravel as Dimitrov turned on the style in the second set, the Brit's frustration seeing the umpire hand him a violation for smashing his racket into his bag.

The unforced errors quickly stacked up and Murray's early exit was confirmed as Dimitrov won the final five games to progress.

He added: "It's very disappointing because I had plenty of time to prepare and practice for this.

"I got myself in a winning position so it couldn't have been that bad, but couldn't close it out. There were far too many unforced errors that crept in towards the end.

"Grigor is obviously a very good player, but I also had opportunities in this match. I was up a break in the third, same at Indian Wells, then lost a run of games in both matches. So I need to look at that and see where I go from there."