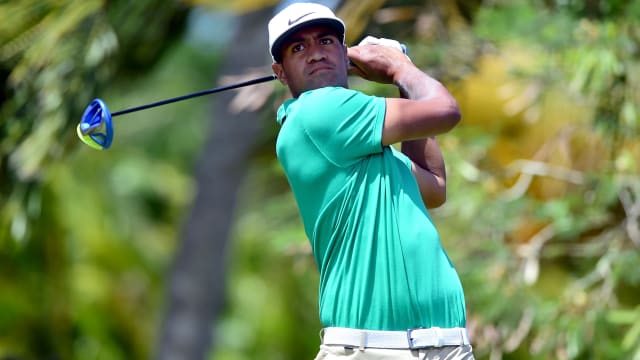 Tony Finau got up and down from a greenside bunker on the third play-off hole to outlast Steve Marino and win the Puerto Rico Open on Sunday.

Finau held a three-shot lead with eight holes left in the final round but dropped two shots down the stretch to settle for a play-off at 12 under par.

The American and compatriot Marino - who carded final-round 70s - both birdied the par-five 18th hole twice in the play-off, but the former made a three-foot birdie putt on the third attempt after his countryman had just missed a five footer, claiming the first PGA Tour win of his career.

"I was just feeding off Steve [on the greens]," Finau told Golf Channel. "I felt like I might need a three [eagle] on the third play-off hole, but I stuck one in there and got it done."

It was a big result for the 26-year-old, who came into the week with five missed cuts in his previous eight starts, which had also dropped him out of the top 100 in the world rankings.

Ian Poulter entered the final round with a one-shot lead but parred his last 13 holes to shoot an even-par 72 and finish in a tie for third at 11 under.

Tied with Poulter was Rodolfo Cazaubon, who shot a four-under-par 68 in Rio Grande to climb nine spots on the final-round leaderboard.

The Mexican also earned an automatic invite into next week's Shell Houston Open with his third-place finish.