Cornet returns with a win, Bouchard knocked out in Miami 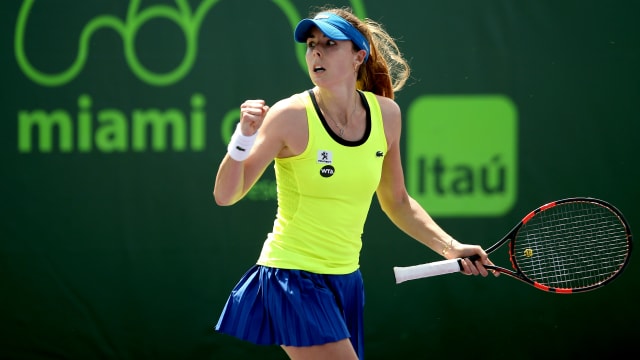 Alize Cornet made a winning return to the WTA Tour following a 6-4 7-5 victory over Galina Voskoboeva in the first round of the Miami Open on Wednesday.

The Frenchwoman was playing for the first time in over two months and set up a second-round clash against Agnieszka Radwanska thanks to a straight-sets victory over her Kazakh opponent.

Eugenie Bouchard suffered another early exit following her third-round loss at Indian Wells, going down to Lucie Hradecka in three sets, while Dominika Cibulkova recovered from a set down to get past Johanna Larsson.

Christina McHale defeated Misaki Doi to move into the next round, but she faces eight-time winner of the WTA Premier hard-court event Serena Williams in the last 64.

The 26-year-old had not played since the second round of the Australian Open in January.

Cornet was in fine form against Voskoboeva but did show a few signs of rustiness, hitting eight double faults in the straight-sets win.

She will come up against Radwanska, who is coming off a semi-final defeat to Williams at Indian Wells.

McHale moves into the next round after defeating Doi, who was just crowned the inaugural champion of the San Antonio Open, and will face top seed Williams.

Coco Vandeweghe defeated Samantha Crawford 6-4 7-5 to set up a clash with sixth seed Carla Suarez Navarro, while Cibulkova's 4-6 6-1 6-2 win over Larsson means she faces fourth seed Garbine Muguruza in the next round.

Hradecka was jubilant after knocking out Bouchard with a 6-4 3-6 6-2 victory.

"In the beginning of the first set I played unbelievable. Then I started to be a little bit tight. I'm so happy I did it."

"It was a crazy bet to play in this @MiamiOpen, and this win is pretty unexpected ! Feels good to be back #missedit," Alize Cornet (@alizecornet).