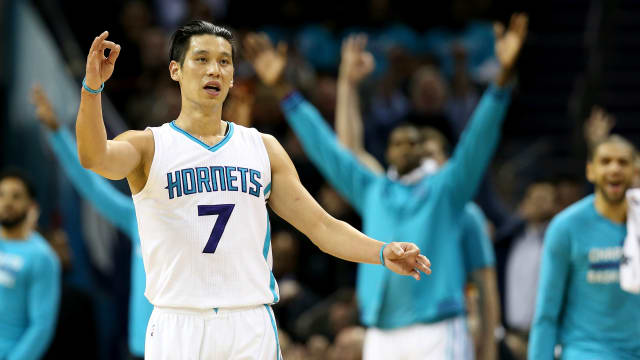 The Charlotte Hornets have recovered from a 23-point deficit to inflict an 11th defeat of the season on the San Antonio Spurs.

Jeremy Lin was on fire as he had 29 points to help the Hornets recover to win 91-88.

The Hornets were outscored 28-7 in the first quarter but rallied to improve to 40-30 for the season.

LaMarcus Aldridge (18 points, 12 rebounds) and Tim Duncan (16 points, 10 rebounds) registered double-doubles for the Spurs, but it was not enough.

There was also late drama in Detroit, as the Pistons needed a late Andre Drummond tip-in to beat the Milwaukee Bucks 92-91.

Drummond had a double-double with 14 points and 16 rebounds, while Marcus Morris top scored for the Pistons with 21.

Giannis Antetokounmpo was in fine form again for the Bucks, registering a double-double of his own with 21 points and 12 rebounds.

Stephen Curry scored 19 points and provided 11 assists as the Golden State Warriors beat the Minnesota Timberwolves 109-104 in a tight affair.

LeBron James had a triple-double of 33 points, 11 assists and 11 rebounds in the Cleveland Cavaliers' 124-91 mauling of the Denver Nuggets.

Will Barton impressed for the Nuggets with 27 points.

The Indiana Pacers were too good for the Philadelphia 76ers, who are still hunting for their 10th win of the season after losing 91-75, while the Boston Celtics triumphed over the Orlando Magic 107-96.

Elsewhere, John Wall had 27 points and 14 assists as the Washington Wizards beat the Atlanta Hawks 117-102, the Chicago Bulls got the better of the Sacramento Kings 109-102 and the Memphis Grizzlies defeated the Phoenix Suns 103-97.