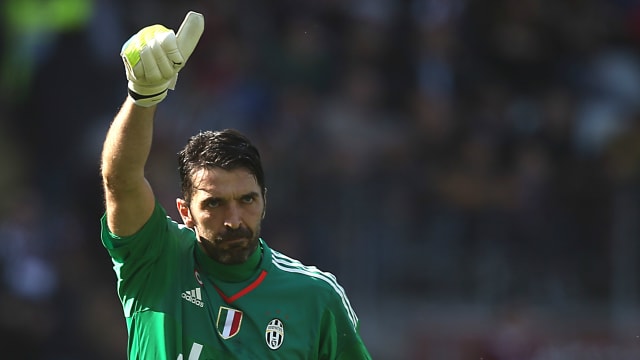 Gianluigi Buffon set a new Serie A record for the longest run without conceding a goal as leaders Juventus took another step towards retaining their title with a 4-1 derby win at Torino.

The veteran goalkeeper had kept 10 clean sheets in a row in the league, but could not extend the streak to 11 and his record was set at 973 minutes, breaking the previous mark of 929 minutes set by Sebastiano Rossi.

Paul Pogba put Juventus ahead after 32 minutes, bending a terrific free-kick over the wall and into Daniele Padelli's top-left corner.

Sami Khedira doubled Juve's lead shortly before half-time, rounding off a powerful run with a precise finish, and Buffon was finally beaten when Andrea Belotti scored a penalty after the break.

Torino had the ball in the net again when Maxi Lopez beat Buffon, but the assistant adjudged him to have been in an offside position and Alvaro Morata sealed the points with a brace.

Khedira was shown a straight red card for dissent with three minutes left on an otherwise fine afternoon for Juve, who go six points clear of Napoli, in action later on Sunday against Genoa.

Striker Paulo Dybala returned from a calf injury for the champions, but Claudio Marchisio and Giorgio Chiellini missed out, while Torino started former Juve striker Ciro Immobile up front.

Buffon made Serie A history after four minutes with the ball deep in Torino territory, before Marco Benassi headed over from 10 yards.

The league leaders looked flat after their midweek Champions League extra-time exit to Bayern Munich and Buffon was soon forced into a full-length stop from Benassi's 20-yard low shot.

Dybala's comeback lasted only 32 minutes before Juve's top goalscorer limped off and was replaced by Morata, with the opening goal arriving against the run of play moments later.

Pogba took over set-piece duties with Dybala off the field and he beat Padelli with a superb curling free-kick from 25 yards.

The France international was almost at it again soon afterwards, but this time Padelli made a good save.

Khedira appeared to put Juve firmly in control after 41 minutes, driving through a huge gap in the Torino defence and slipping a shot beyond Padelli.

Torino, though, got one back immediately after the break, Belotti converting a spot-kick after Alex Sandro clumsily brought down Bruno Peres.

The hosts thought they had equalised after 58 minutes when scored from a Peres throughball, but the goal was wrongly disallowed for offside, with the half-time substitute Lopez level.

That decision proved key as Juve soon restored their two-goal cushion when brilliant play by Pogba teed up Morata for a calm finish.

Torino, who have now only won just one of the last 20 derbies against Juve, pressed and Buffon saved well from Lopez, but Morata made sure of his side's victory with 14 minutes to go.

Pogba's free-kick hit the wall and the ball deflected into Morata's path for a simple goal and Juve, who played out the game with 10 men following Khedira's late red card for speaking out, moved closer to a fifth successive league title.

- Prior to Belotti's goal, Buffon had not conceded goals for 973 minutes in the league, a new record in the Serie A history.

- Torino have conceded four goals twice this season in all competitions: both against Juventus.

- Pogba has scored two goals from direct free-kick for Juventus, both against Torino (one in Coppa Italia).

- Morata bagged his third Serie A brace. His last three league goals have been scored as a substitute.