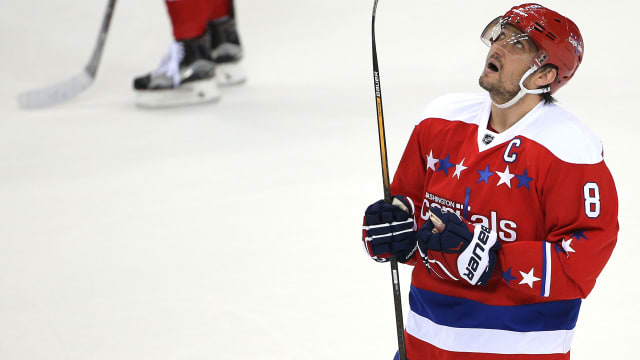 The Washington Capitals became the first team to clinch their spot in the NHL play-offs thanks to a 2-1 overtime win against the Carolina Hurricanes.

Alex Ovechkin delivered in OT after Justin Williams and Jordan Staal had traded second-period goals at the Verizon Center.

With their win, the Capitals sealed a spot in the play-offs for the eighth time in the past nine seasons.

The Philadelphia Flyers closed to within a point of the wildcard places in the Eastern Conference with a 4-3 win over the Detroit Red Wings.

Michael Raffl scored twice for the in-form Flyers, whose two first-period goals were crucial as they moved closer to the Red Wings.

The Los Angeles Kings continued their fine form with a 5-2 win over the Dallas Stars.

Anze Kopitar had a goal and an assist for the Kings, who made it nine victories from their past 12 games.

A goal from Erik Karlsson with 31 seconds remaining led the Ottawa Senators to a 3-2 overtime win against the Minnesota Wild.

Kris Letang was the only goalscorer in the shoot-out to see the Pittsburgh Penguins edge the New York Islanders 2-1.

The San Jose Sharks came from behind to overcome the Boston Bruins 3-2, with Joonas Donskoi scoring the winner.

The Florida Panthers cruised against the Montreal Canadiens, claiming a 4-1 win, while the Toronto Maple Leafs beat the Tampa Bay Lightning by the same scoreline.