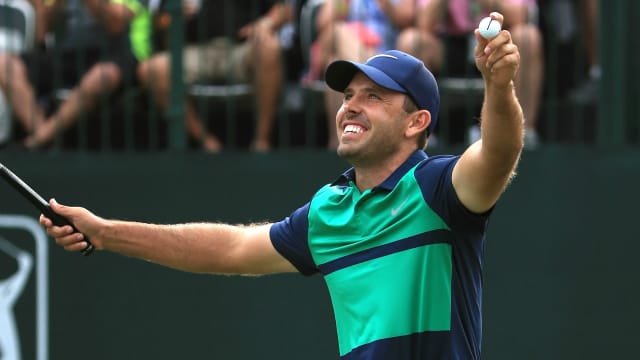 Charl Schwartzel picked up his second PGA Tour win after completing a remarkable comeback in the fourth and final round of the Valspar Championship.

The South African started the day five shots behind leader Bill Haas, but eventually triumphed in a play-off against the American to seal his first PGA Tour title since the 2011 Masters.

Windy conditions made for a tough day at an already-difficult Copperhead course and despite hitting two bogeys, Schwartzel boasted the best score of the round as he carded a four-under 67.

Birdies on the first and third set the world number 32 for a good day and another four birdies on the back nine, including a 23-foot birdie putt on the 17th, put him into a play-off against Haas, who struggled for much of the day.

Haas posted three bogeys and two birdies to finish one over for the round and seven under overall.

Haas spent plenty of time in the sand, recovering to par in holes five and 18 and he found himself in the bunker again in the play-off.

He wedged the ball well for the approach, but Schwartzel's unhindered approach got him closer to the hole and he managed a par to win the title on the first play-off hole.

In doing so, he became the ninth international winner of the Valspar Championship.

Ryan Moore finished two strokes off the pace in third, having shot par on Sunday, while amateur Lee McCoy shot two under on the day to finish in fourth.

Charles Howell III and Graham DeLaet rounded out the top five at three under having shot one over and four over respectively on the final day.