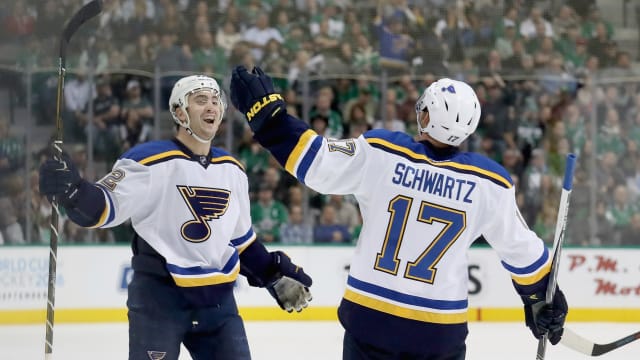 Alex Pietrangelo's fifth goal of the season helped the St. Louis Blues to a sixth-successive NHL win courtesy of a 5-4 overtime victory against the Dallas Stars.

The Blues took an early lead through Troy Brouwer but the Stars hit back just over two minutes thanks to Cody Eakin.

Vladimir Tarasenko restored the Blues' lead but once again the Stars managed to tie the game through Jason Spezza, before a double from Kevin Shattenkirk had the visiting side 4-2 up heading into the final period.

However, the Stars managed to fight back in front of their home support, Spezza scoring a second and Jamie Benn tying the game with 72 seconds on the clock to send it into OT.

But it was there where the Blues prevailed, Pietrangelo the unlikely hero.

The Florida Panthers won back-to-back games for the first time in almost three weeks thanks to a 5-4 triumph over the Philadelphia Flyers.

Flyers' Nick Cousins cancelled out Reilly Smith's opener before Ryan White put the away side into the lead, but Jonathan Huberdeau tied things up by the end of the second period.

The Flyers retook the lead less than 90 seconds into the final period, before Aleksander Barkov and Smith put the Panthers ahead, but Shayne Gostisbehere scored late to ensure the game went to OT.

Neither side could find the net meaning a shoot-out would decide the winner, Nick Bjugstad and Barkov scoring to seal a Panthers victory.

The Washington Capitals suffered a third loss in their last five games after going down 5-2 to the San Jose Sharks, while Jack Eichel scored his second goal of the game with under one second left in OT as the Buffalo Sabres beat the Carolina Hurricanes 3-2.

In other results, Mikael Granlund scored twice as the Minnesota Wild outgunned the Montreal Canadiens 4-1, the Vancouver Canucks trumped the Nashville Predators 4-2, John Moore scored with 15.2 seconds remaining in OT to seal a 2-1 win for the New Jersey Devils against the Los Angeles Kings, and the Arizona Coyotes comfortable defeated the Edmonton Oilers 4-0.

The Winnipeg Jets came from two goals behind to edge the Colorado Avalanche 3-2, the Ottawa Senators shut-out the Toronto Maple Leafs for a 4-0 win, David Pastrnak scored twice as the Boston Bruins beat the New York Islanders 3-1, while Darren Helm also netted twice as the Detroit Red Wings defeated the New York Rangers 3-2 after OT.