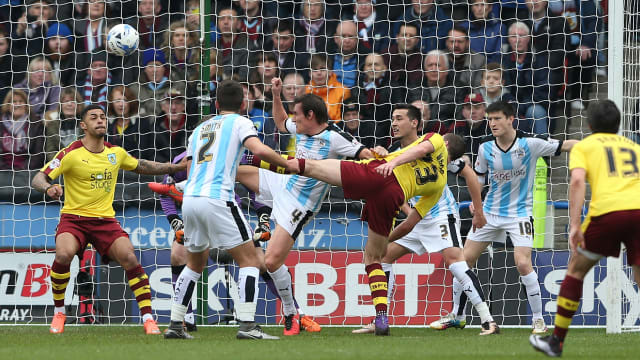 Burnley moved seven points clear at the top of the Championship with a 3-1 victory at Huddersfield Town, recording their sixth successive league win.

Stephen Ward, Sam Vokes and Ben Mee were all on target in the first half as Sean Dyche's Clarets extended their unbeaten run to 14 Championship matches.

Burnley's lead stretched as their nearest rivals Middlesbrough were not in action. They travel to Charlton Athletic on Sunday, but will make the trip without manager Aitor Karanka after the club confirmed Steve Agnew will take charge amid reports of the Spaniard rowing with his players.

Hull City could have climbed above Middlesbrough into second spot, behind Burnley, but Steve Bruce's side could only draw 1-1 at home to MK Dons, a Sam Clucas free-kick cancelling out Antony Kay's opener.

Rotherham United's resurgence under Neil Warnock continued as they scored three goals in the last 10 minutes to earn a 3-3 draw at home with fifth-placed Derby County. Danny Ward gaving the Millers hope before substitute Leon Best struck twice in the closing moments.

Sheffield Wednesday remain in the final play-off place after a 3-0 win at Nottingham Forest ended their five-match run without a league victory.

League One leaders Burton Albion boosted their cushion atop the table to six points after Mark Duffy struck twice in a 2-1 home win against Fleetwood Town.

Wigan Athletic lost ground on Burton after drawing 3-3 at bottom side Colchester United, a Will Grigg equaliser in the 90th minute rescuing a point for Gary Caldwell's men.

Gillingham and Walsall maintained their promotion challenges with a 3-0 home win against Crewe Alexandra and a 4-1 victory at Chesterfield respectively.

The League Two match between Exeter City and Carlisle United was subject to a lengthy delay after a fire alarm went off, with the visitors going on to claim a 2-2 draw at St James Park.

Accrington Stanley boosted their promotion hopes with a 2-1 home win against Plymouth Argyle, closing the gap on the third-placed Pilgrims to just five points.