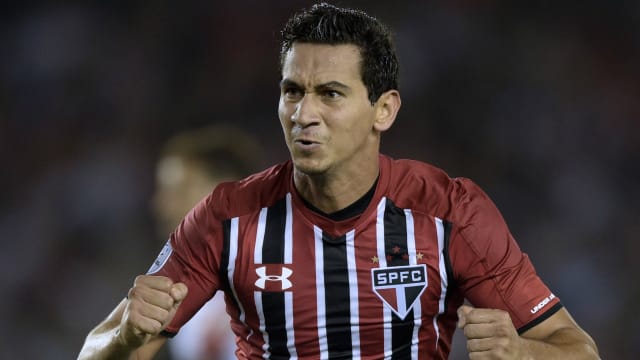 Sao Paulo picked up a crucial point against River Plate as they drew 1-1 and stayed in touch with the Group 1 leaders in the Copa Libertadores.

After watching hosts River hit the crossbar early, Sao Paulo responded well and took the lead in the 17th minute through attacking midfielder Ganso, who rifled home a fine strike from just outside the box in Argentina on Thursday.

Brazilian giants Sao Paulo led for all of 15 minutes before they conceded in remarkable fashion.

Goalkeeper Denis made a mess of what should have been a regulation catch from a corner, punching the ball into his own defender Thiago Mendes, who inadvertently sent the ball looping over the former to restore parity.

Neither side could break through in a tense second half, ensuring both took a share of the points.

The draw kept River second in the group with four points, two adrift of The Strongest and three clear of Sao Paulo.

Bolivian outfit Bolivar conceded a last-gasp goal as they drew 1-1 at home to Boca Juniors.

Boca had to wait until the 95th minute for their equaliser through Federico Carrizo, after Erwin Saavedra had put the home side a goal up in the 28th minute.

The result means Boca have now drawn all three of their Group 3 matches, to be a point behind Bolivar and Racing Club.

In other results, Group 6 leaders Toluca beat LDU Quito 2-1 away from home.

Gerardo Rodriguez put the visitors a goal up after 42 minutes, only for Fernando Hidalgo to level the scores three minutes into the second half.

But Toluca would not be denied as the Mexicans netted their winner through Fernando Uribe with five minutes to spare.

As for Colo Colo, they played out a goalless draw at home to table-topping Atletico Mineiro, who were without an unwell Robinho for the Group 5 clash.