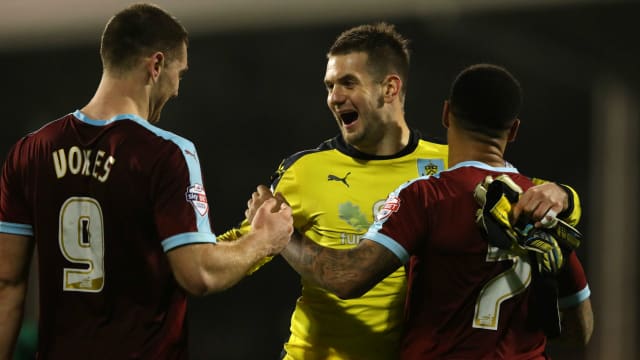 Burnley opened up a four-point lead at the top of the Championship with a 3-2 win at Fulham and were the only one of nine top-10 sides in action to register a victory.

Sam Vokes headed Burnley into the lead, but Ross McCormack and Moussa Dembele turned the scoreline on its head before the interval.

Vokes restored parity after Joey Barton had been felled in the box early in the second half, before Andre Gray fired home the winner shortly after the hour mark.

The result sees Burnley pull ahead of Middlesbrough, who were beaten by a Lee Frecklington strike in a 1-0 defeat at Rotherham United, who are now on a three-match winning run under Neil Warnock and a point from safety after MK Dons drew 0-0 at 10-man Charlton Athletic.

Brighton and Hove Albion climbed above Hull City - in FA Cup action against Arsenal - to go third with a goalless draw against Sheffield Wednesday, while Derby County failed to gain ground as they lost 2-0 at QPR.

Wednesday's failure to pick up a victory left them prone to falling out of the play-off positions, but they were spared by 2-0 defeats for Cardiff City and Birmingham City against Leeds United and Blackburn Rovers respectively, as well as Ipswich Town conceding a last-gasp equaliser in a 2-2 draw with beleaguered Bolton Wanderers.

Burton Albion's hopes of being a Championship side next season suffered a slight setback with a 2-0 loss at play-off chasing Bradford City, though Nigel Clough's side remain four points clear at the summit.

Also in League One, Scunthorpe United overcame Doncaster Rovers 2-0, while Shrewsbury Town moved further clear of the drop zone with a 2-1 triumph over out-of-form Coventry City.

The League Two play-off race saw Portsmouth prevail 3-1 at Accrington Stanley to move above their hosts, while there were also wins for Bristol Rovers and Barnet, and Dagenham and Redbridge's clash with Carlisle United ended goalless.