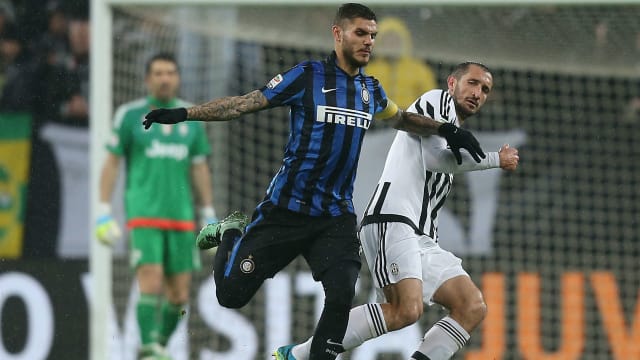 Giorgio Chiellini is an injury doubt ahead of Juventus' Coppa Italia semi-final against Inter on Wednesday.

Chiellini returned after three matches out with a calf issue in Sunday's Serie A clash with Inter but lasted just 36 minutes before being replaced by Daniele Rugani in the 2-0 win at Juventus Stadium.

Massimiliano Allegri is now waiting on further examinations before determining whether the centre-back will be able to feature at San Siro.

"In some cases you have to take a risk but Chiellini started on Sunday because he was fit to play," said Allegri.

"Now we'll wait and see the results of his examination before determining his recovery time.

"Rugani is young, he is growing, and playing will only help his development."

Despite concerns over Chiellini's fitness, Allegri admitted he is debating leaving out Andrea Barzagli, while a change in the attacking duo could see Alvaro Morata and Simone Zaza link up.

"I may rest Andrea Barzgali. In attack, I'm considering partnering Morata with Zaza," he added.

"[Patrice] Evra was absent at the weekend for personal reasons, but he'll be back. [Roberto] Pereyra is in the frame."