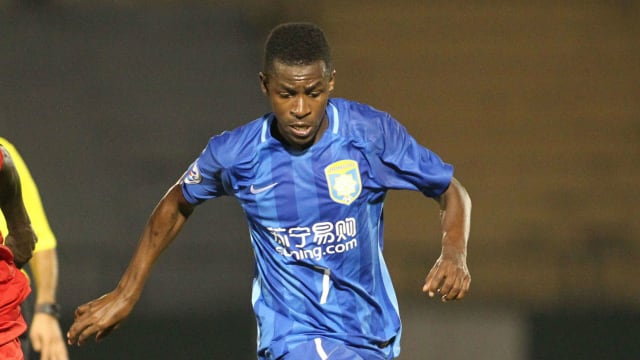 Goalkeeper Bui Tan Truong had a moment to forget as Binh Duong fell 3-1 at Tokyo in the AFC Champions League, while Alex Teixeira scored his first Jiangsu Suning goal against Jeonbuk Motors in a match that saw Ramires sent off.

Tokyo, who lost their Group E opener to Jeonbuk, fell behind to Nguyen Anh Duc's first-half opener, but the hosts were level five minutes after the break through Nathan Burns.

Tan Truong then kept out Francisco Sandaza's penalty, only to go from hero to zero with a horror moment in the 68th minute.

A corner from the right looked easy enough for Tan Truong to deal with, but the goalkeeper misjudged his punch and headed into his own goal - Ryoichi Maeda's late strike compounding the Vietnamese side's misery.

Teixeira, who along with Ramires joined Suning during a close-season of huge spending in the Chinese Super League, opened the scoring with a low 20-yard drive that found the bottom-left corner.

Lee Dong-gook levelled shortly after the hour, only for quickfire goals from Jo and Wu Xi to put Suning in control.

Kim Shin-wook halved the arrears in the 86th minute and there was more drama to follow when former Chelsea midfielder Ramires was harshly shown a straight red card in injury time for a shove on Lee as tempers flared.

In Group F, Adriano scored a second-half hat-trick as Seoul hammered Japanese champions Sanfrecce Hiroshima 4-1, while Shandong Luneng also made it two from two with a 3-0 beating of Thai champions Buriram United.

Modibo Maiga scored on his AFC Champions League debut as Al Nassr earned a first win of the competition with a 1-0 win at Bunyodkor in Group B, and Zob Ahan and Lekhwiya played out a goalless draw.

Rounding off the action, Al Nasr defeated Sepahan 2-0 in Group A, and Al Ittihad drew 1-1 against Lokomotiv.