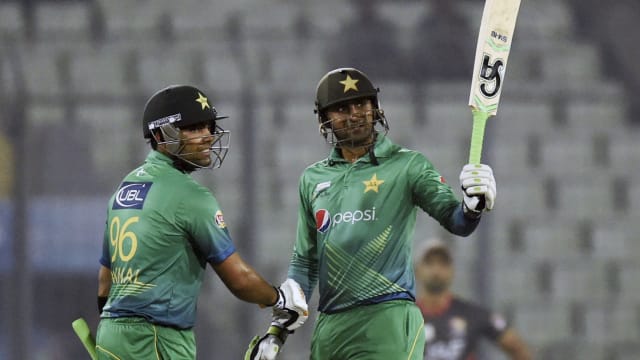 Waqar Younis praised the experienced duo of Shoaib Malik and Umar Akmal for getting Pakistan their opening win of the Asia Cup on Monday.

After losing three early wickets against United Arab Emirates, Pakistan found themselves in trouble at 17-3 in the fourth over, chasing 130 to win.

However, there was no repeat of their collapse against India as Shoaib (63 not out) and Umar (50no) put on an unbeaten 114-run partnership to complete a seven-wicket victory.

Waqar was delighted to see the pair turn their fortunes around and believes Pakistan are contenders to lift the trophy on Sunday.

"They took their time, when you lose wickets like this in a cluster in the first few overs, it always creates pressure and I think they absorbed the pressure very well," said the Pakistan coach.

"Although the run rate went up we always knew they were capable of getting when the time would come. Yes it was a little scary in the beginning but they both played really well."

He added: "We are a force in this tournament, we've got to really play in the next two games, in T20 you are going to get into jail and out of jail at times and that is exactly what happened today. We were in problems, but your mature players take you out of that.

"The other day [against India] we batted really poorly but we are getting better and hopefully in the upcoming games we will be even better than this."